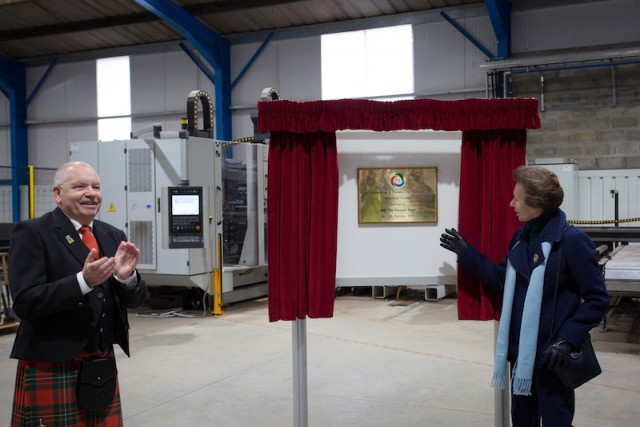 Her Royal Highness visited a number of Moray organisations including AJ Engineering where she was met by managing director Alan James and director Graham Alexander and opened the company’s new complex at Waterford in Forres.

Her Royal Highness was also shown the company’s HQ at the nearby Greshop Industrial Estate where she met members of staff who spoke about the numerous projects the business has worked on across the world including high profile works such as the Forth Road Bridge and a new contract which will see the company sending staff and products over 8000 miles away to Antarctica.

The Princess Royal was presented with a hamper filled with local products and was also gifted a boot scraper which was designed by one of the company’s apprentices and fabricated by workshop foreman Clark Hurley.

“We were absolutely delighted to welcome Her Royal Highness to AJ Engineering and be given the opportunity to show her the work that we do here.

“We are also thrilled that she has officially opened our new facility at Waterford.

“It has taken a lot of planning and determination and to have Her Royal Highness here today has made all of that investment so worthwhile.”

Alan who is a Deputy Lieutenant of Moray added:

“We feel very privileged that she included AJ Engineering on her Moray visit and I would like to thank the staff who worked hard to prepare our premises.

“It was certainly an exciting day.

“It was enjoyable to be able to share the AJ Engineering story from when it began, to the present day.”

As part of her visit, Her Royal Highness heard about local community-based projects that AJ Engineering supports including two projects for the Forres Heritage Trust.

Her Royal Highness had earlier met several members of the local community in the historic courtroom housed within the Tolbooth which is owned by the Forres Heritage Trust.

She was welcomed there by Trust chairman George Alexander.

“It was wonderful to be able welcome Her Royal Highness to the Tolbooth and to introduce her to many of the people who make Forres the fantastic community it is.

“We were also pleased to be able to show off the newly renovated courtroom which is looking stunning.”

The Lord Lieutenant for Moray, Major General Seymour Monro, who accompanied Her Royal Highness on her visit said:

“It is wonderful that The Princess Royal has come here and has been given a fabulous insight into what a great community we have in Forres.

“Being able to show her the Tolbooth and introduce her to key members of the community, then take her to a business which is so invested in the community had a great symmetry.

“At AJ Engineering, Her Royal Highness was able to see how AJ Engineering has grown over the last 22 years and how it is now one of the leading firms of its kind having started trading in January 1999 with just Alan as an employee to a workforce of over 80.

“It has an ethos for supporting young people through its apprenticeship scheme and is committed to working in the local community as well as securing contracts across the globe.”