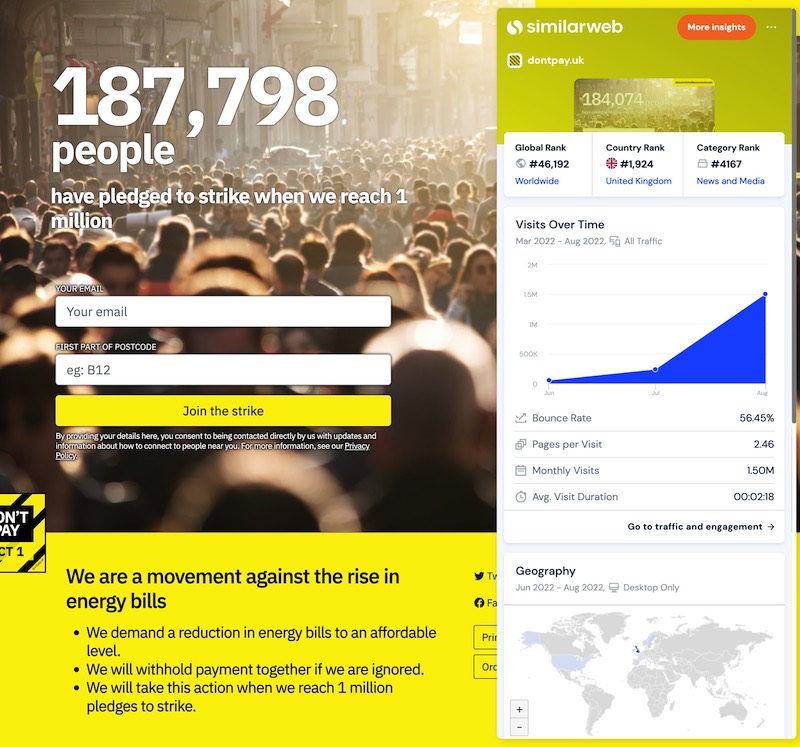 Visits have exploded to over six times the amount from July, going from 225,000 visits to 1.5 million, a 566% increase in just a month as the energy crisis intensifies towards October and the price cap is set to be £2,500.

At least 1.27 million of views to the energy bill strike website were from the United Kingdom.

The analysis, by AskGamblers.com, reveals that visits to the website Dontpay.uk exploded to over six times the amount in August from the previous month, from 235,000 to 1.5 million, an unprecedented increase in people drawn to the energy bill strike pledge website.

85.5% of which has been viewed in the UK, meaning at least 1.27 million Britons viewed the energy bill strike website in August.

Don’t Pay currently has a combined following of over 335,000 across its social media accounts.

According to Google Trends data, the following cities with the strongest search interest in ‘Don’t pay UK’ over the last 30 days are:

Money Saving Expert founder Martin Lewis has warned that we could be heading towards a Poll Tax moment regarding the energy crisis, saying that the government needs to take action to prevent civil unrest.

Prime Minister Liz Truss has announced a freeze on the current cap at £2,500 a year from October.

Even with the cap frozen at this price, End Fuel Poverty Coalition estimates that 6.9 million UK households will still be in fuel poverty in the winter; up an additional 2.3 million households from last year.

Citizens Advice says to contact your supplier if you can’t afford to pay your energy bills, as they must help you come up with a solution.

There are risks if you breach your energy supplier contract. In some cases, it could lead to homes being fitted with prepayment meters.

In rare cases, you could risk having your energy supply cut off.

If bills remain unpaid, your energy supplier can pass your debt to a collection agency which will impact your credit score, making it harder to take out a loan, mortgage or credit card in future.

A spokesperson at AskGamblers.com, commented on the findings:

“The sharp rise in the cost-of-living is putting a strain on millions of UK households.

“There is clearly a growing trend across the country to find ways to lessen the squeeze on budgets.

“The Don’t Pay movement is gaining huge momentum, with visits to the website exploding to over six times the amount in one month, to 1.5 million.

“It’s a worrying sign that energy bills are becoming unaffordable for millions.

“However, it is advised to communicate with your energy supplier rather than refusing to pay altogether.”