A9 Luncarty to Pass of Birnam – Traffic Management Changes 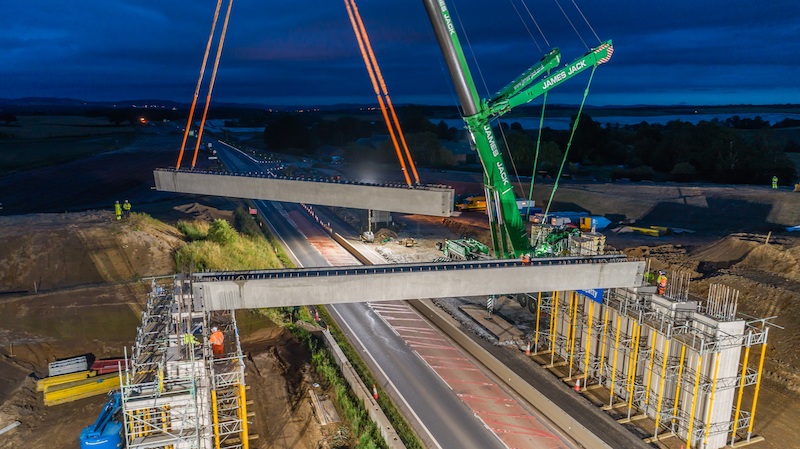 A9 road users advised of traffic management changes north of Perth as part of A9 Dualling.

As works progress on the A9 Dualling: Luncarty to Pass of Birnam Project, traffic will be switched on to another new section of newly constructed carriageway from 17 November 2020.

This planned alteration to the traffic management arrangement between Luncarty North and Bankfoot North Junctions, will result in road users utilising the newly constructed sections of the new A9 carriageway over the full length of the project between Luncarty and Birnam for the first time.

Road users are reminded that traffic will remain in single carriageway configuration and the current restrictions including ‘no overtaking’ and the 40-mph temporary speed limit remain in force.

As a result of switching traffic onto the new section of carriageway, Luncarty North Junction will close permanently with new access for southbound A9 traffic provided via the new slip road at the Stanley/Tullybelton Junction.

Additionally, the temporary mini roundabout and associated 30mph temporary speed limits to the south of Bankfoot will be removed from the A9 trunk road.

Two-way temporary traffic signals will be in place on the A9 overnight on 16 November 2020, to allow the traffic switch and associated preparatory works to be carried out safely.

Switching A9 traffic onto this new section of carriageway allows the next phase of the works to begin, including the removal and replacement of the old A9 road surface.

This will allow construction to commence on both the new northbound carriageway and the upgrades to Bankfoot South Junction.

The planned changes to the traffic management layout will also affect the following junctions and slip roads:

Bankfoot South Junction: – access to Bankfoot for northbound traffic will be provided via a temporary junction approximately 40m south of the existing junction.

There remains no access to cross the A9 via the new structure at the current time.

Those wishing to access Tullybelton from the A9 should continue to follow the signed diversion via Bankfoot.

Local access to Newmill Farm from the A9 will be maintained.

Access to the northbound A9 from Luncarty will be via Luncarty South Junction to the B9099 (for Luncarty & Stanley).

Access to and from the southbound A9 will be via the new slip roads at the Stanley/Tullybelton Junction and the new Luncarty Link Road.

Southbound traffic travelling to Luncarty will leave the A9 at the new Stanley/Tullybelton Junction and use the new slip roads to join the Luncarty Link Road towards the C569 Strathord Station Road.

As with all alterations to traffic management, road users are being reminded to follow the signage provided and take extra care on approach.

“We are urging all motorists to adhere to the speed limits and ‘no overtaking’ restrictions which have been put in place for the safety of the workforce and other road users.

“Police patrols, including unmarked vehicles, will continue to monitor the area of the works and enforcement action will be taken where necessary.”

“This marks a significant milestone for the project and highlights the progress that has been made to date.

“As we reach this important stage in the project, I am proud of what has been achieved in the face of unprecedented challenges.

“We continue to operate with our focus firmly on the safety of our people, the communities around us and the thousands of road users who use the A9 each day.”