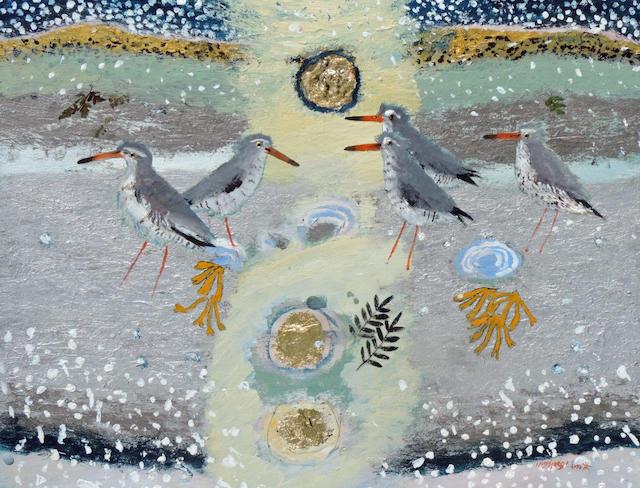 An acclaimed Scottish artist whose work has been shown across the world will be exhibiting at Logie Steading Art Gallery this month.

It will be the first time that Ingebjorg Smith, whose work predominantly features birds has exhibited at the gallery situated just outside of Forres.

Her show had been planned to take place a year ago, but due to Covid, had to be put on hold.

However, Logie Steading Art Gallery which each month features a different artist has a vibrant schedule for the rest of the year.

Panny Laing who owns and curates the items in the gallery said:

“We are delighted to be open again and are thrilled to be welcoming Ingebjorg.

“She has a wonderful reputation and I had wanted to showcase her work for some time.

“I never thought we would have to delay for a whole year, but here we are, and her artwork is well worth waiting for.”

“We have a great line-up of artists for the whole year and we are just keeping our fingers crossed that this time, each of the exhibitions will be able to go ahead.”

Ingebjorg, whose work has been described as ‘stunning collage landscapes of birds and animals, beautifully evocative, tactile and thoroughly magical,’ said she is looking forward to exhibiting at Logie Steading Art Gallery for the first time.

“Quite a few exhibitions have had to be postponed, but I am looking forward to being at Logie.

“I was supposed to be there last June, but we just had to put it on hold until we knew what the situation was.

“Some of the pieces I had planned to bring have now been sold in my own gallery, but I have some new pieces coming to Logie and I actually think some of these are nicer.

“The work will feature birds but there are a few other bits of wildlife too.

“It is predominantly mixed media and collage.”

“The lockdown to some degree helped my artwork as the wildlife seemed much keener to come out of hiding which made it much easier for me.”

Ingebjorg was educated at the Glasgow School of Art.

She has travelled extensively in Kenya, Asia and Australia, where she transformed her illustration skills into fine art collage paintings.

She now lives in Tain although her work has been exhibited in the Netherlands, Dublin, Munich, Switzerland, Hong Kong, Singapore and Stockholm.

Last year, Ingebjorg put her artistic skills to good use to raise money for charity.

She had found a number of unused mini canvases and used them to make custom-made canvasses to raise some funds for NHS charities, incorporating the bird figures which have become her trademark.

The Over the Rainbow series received orders from around the country.

Ingebjorg Smith’s exhibition will run from June 4 to June 28.