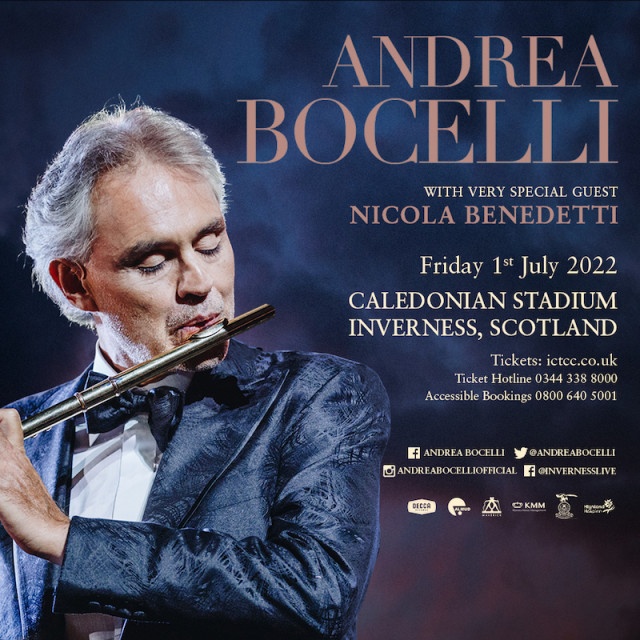 Andrea Bocelli, The defining tenor of our era, live for the very first time in the Highlands of Scotland.

Today it was announced that Scotland’s own classical superstar Nicola Benedetti will appear as very special guest on the show.

Bocelli will perform as part of his World Tour during his first visit to the Scottish Highlands for this spectacular outdoor show at The Caledonian Stadium, Inverness, Scotland on Friday 1st July 2022.

“I’m hugely excited to be playing at the Caledonian Stadium, Inverness for a great crowd in my home country.

“Thank you so much to Andrea Bocelli for this invitation.

Born in Ayrshire, Scotland, Nicola Benedetti is one of the most sought-after violinists of her generation.

Her ability to captivate audiences and her wide appeal as an advocate for classical music has made her one of the most influential artists of today.

In 2021-2022, Nicola opens the Barbican Centre’s season and amongst others, collaborates with the London Symphony Orchestra, Netherlands Radio Philharmonic and Cincinnati Symphony.

Winner of the GRAMMY Award for Best Classical Instrumental Solo in 2020, as well as Best Female Artist at both 2012 and 2013 Classical BRIT Awards, Nicola records exclusively for Decca (Universal Music).

Her latest recordings of Vivaldi Concerti and Elgar’s Violin Concerto entered at number one in the UK’s Official Classical Album Chart.

Other recent recordings include her GRAMMY award-winning album written especially for her by jazz musician Wynton Marsalis: Violin Concerto in D and Fiddle Dance Suite for Solo Violin.

The Highland’s music lovers will for the first time, experience the remarkable voice of the Italian tenor who has been called “The Tenor of Our Time” and famously by Celine Dion “The Voice Of God”!

It is a remarkable voice that touches the heart of listeners, equally whether performing the greatest Italian opera arias or anthemic, classically inspired modern pop.

In his remarkable career he has sold some 90 million albums, taking opera music to a whole new audience, in doing so becoming the biggest selling classical soloist in recording industry history.

“It will be more than a concert: it will represent a personal joy for me, an important debut of my mature career.

“It will give me the huge privilege to take my voice to one of the most fascinating places on earth, full of history, beauty and poetry.

“After this long and difficult time that has shaken all of humanity, going back to the UK will be incredibly emotional: the returning sunshine after the storm.

“As in the words of the popular ballad I already feel like “My heart’s in the Highlands”!”

This spectacular concert will feature arguably the greatest tenor of our age, in the prime of his vocal talents performing the greatest opera arias of all time.

The programme will be bursting with passion and romance.

In addition to the great Italian operatic repertoire there will be selections from the Neapolitan and Italian popular song traditions, as well as some new songs from Andrea’s popular repertoire, and notably some debut live performances of songs from the new album “Believe”.

“Everyone at Inverness Caledonian Thistle is delighted to be able to welcome the world renowned and respected artiste Andrea Bocelli to the Caledonian Stadium next summer.

“It is a huge feather in the cap of the club, the City of Inverness and indeed the Highlands of Scotland.

“Andrea Bocelli is a world star who has made the crossover from being the most loved tenor on the planet to being known to music fans the world over and we are honoured to be hosting his incredible World Tour in Inverness.

“I am sure that music fans from all over Scotland and beyond will flock to see this fabulous concert.”