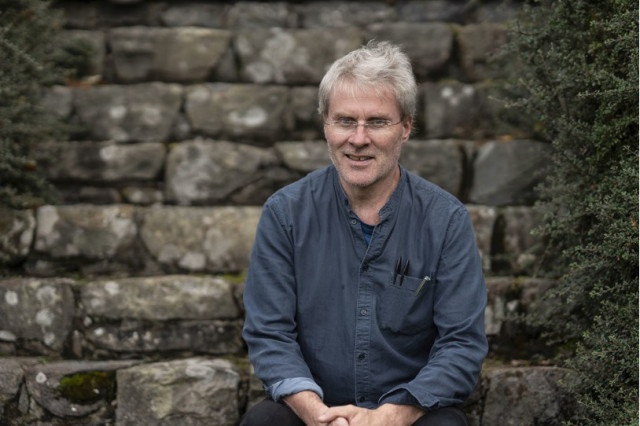 The Royal National Mòd have appointed its new Bard today, Wednesday 13 October, as the sixth day of the prestigious annual Gaelic cultural event gets underway.

Celebrated Gaelic poet Rody Gorman (pictured) has been awarded the historic literature honour in recognition of his significant contribution to the Gaelic literary world.

Born in Dublin and now living on the Isle of Skye, Rody has enjoyed a prolific career with dozens of Gaelic literary translations and original collections of poetry in Scottish Gaelic, Irish and English, to his name.

Rody lectures in creative writing, edits the annual bilingual anthology of contemporary Gaelic poetry An Guth and has been awarded numerous writing fellowships and residencies, including writing fellow at Sabhal Mòr Ostaig and convenor of the Translation and Linguistic Rights Committee of Scottish PEN.

Rody is the 57th recipient of the Bardic award, which was first awarded almost 100 years ago in 1923.

The Skye-based writer takes over from outgoing Bard Sandaidh NicDhòmhnaill Jones, who held the role for two years after last year’s Mòd was unable to go ahead in person.

“I am greatly honoured to have been awarded the position of Bard of the Comann Gàidhealach in recognition of my work over the years.

“I am conscious and proud that in doing so I’m following in the footsteps of so many others, including Donald Macintyre, Mary Maclean, Angus Peter Campbell, Myles Campbell, Catriona Montgomery and Aonghas MacNeacail, not to mention the office-bearer in 1935, Donald Grant of Camuscross, where I have lived for more than 30 years.

“While in office I hope to promote Gaelic poetry and produce relevant work.”

Historically, Wednesday is the Mòd’s literature day, and this year will see various literary events take place, including an online literature programme, the launch of a new book of Gaelic songs and poems from the outgoing Bard, and an audience with two of Gaeldom’s most prominent writers, Alasdair C. Whyte and Angus Peter Campbell.

The crowning of the Bard comes ahead of this evening’s prestigious An Comunn Gàidhealach Gold Medal, which will see a group of the best men’s and ladies Gaelic singers from across Scotland compete in front of audiences in person at Eden Court Theatre and broadcast live on BBC Alba.

Today also sees qualifying events for the ladies and men’s Silver Pendant get underway before the final kicks off at 2pm.

An evening of drama at Eden Court’s One Touch Theatre, featuring performances from community groups Buidheann Dràma Chille Mhòire, Sgioba Dràma Uibhist and Buidheann Dràma Coimhearsnachd from Inverness comes next, while a joyful online showcase of The Clàrsach at the Mòd, hosted by the BBC’s Joy Dunlop, celebrating the long-established link between Comunn na Clàrsach and An Comunn Gàidhealach, rounds off the day.

“Today marks the busiest day in the Mòd’s nine-day programme of events, with exceptional Gaelic musicianship and literary excellence to be enjoyed.

“After two successful days of children’s competitions, today it is the turn of the ladies and men as we welcome the prestigious Silver Pendant and Gold Medal competitions.

“The mark Rody has made on Gaelic culture, through his own original works, translations and numerous literary endeavours, is considerable.

“A fantastic ambassador for Gaelic language and literature, I would like to extend my heartfelt congratulations.”

“Audiences always enjoy the literary aspects of the Royal National Mòd, and today’s events ranging from the crowning of the Bàrd to Comhairle nan Leabhraichean’s events and the community drama competitions are essential aspects of increasing the use of Gaelic.

“The events demonstrate the quality and range of writers, actors and other creative artists who contribute throughout the year to the richness of the Gaelic language and its attractiveness and energy.”

Across the remaining three days, the festival will stage a variety of stunning performances and cultural activities celebrating the language, history and future of the Gaels, culminating in a sensational Mòd Grand Finale with Sian and New Tradition on Friday evening at Eden Court Theatre and a massed gathering of Gaelic choirs at the Northern Meeting Park on Saturday morning.

The Royal National Mòd will run until 16th October 2021.