Be Responsible on Farmland 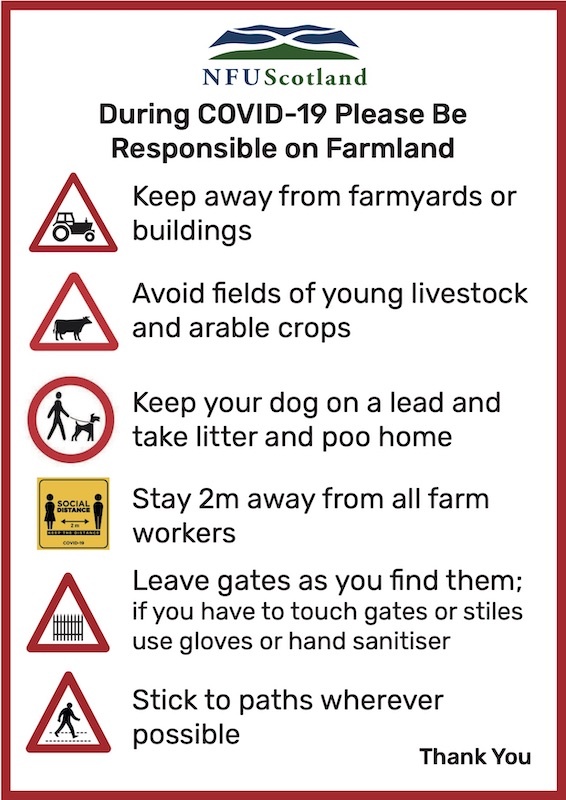 NFU Scotland has produced a poster for farmers and crofters urging care to be taken by those accessing the countryside during this exceptional period.

The Scottish countryside remains open for people to access and enjoy but care and respect for those living and working in rural areas is requested.

Since lockdown, NFU Scotland’s regions have been logging calls taken from a substantial number of members reporting problems with public access.

People walking through fields of cows with calves; ewes with lambs and pregnant animals with dogs off the lead.

Failing to pick up dog poo and, in some instances, bagging dog poo then throwing it into fields of growing crops.

People accessing farm buildings and, in one case, someone walking through a shed of cows and young calves with a dog.  In another incident, a family accessed the farmhouse garden to take photographs.

Abandoning cars and vans in farm gateways and farm roads while going for a walk or cycle.

Ignoring reasonable requests to use hand sanitiser when opening and closing farm gates.

Taking access across fields of crops, such as wheat and barley, and one report of people playing golf in an arable field.

Gates being left open and one reported incident where Highland Pony stallions were allowed access to juvenile mares.

“The Scottish countryside remains open and an hour’s responsible exercise each day is a central plank of the recommendations from Government on how we get through this crisis.

“For many, accessing the countryside is a new experience and we want to help guide them on how to do that responsibly and safely, recognising the legitimate concerns of those who are farming and crofting in these unprecedented times.

“This is the busiest time of the year for farming – lambing, calving, ploughing, planting and more.

“To fulfil our pledge to keep Scotland’s plates and glasses full throughout this crisis, we need farmers, crofters, their families and staff to stay safe, healthy and able to get on with the job of producing food and drink.

“We respectfully ask that people please follow these simple guidelines in the poster.