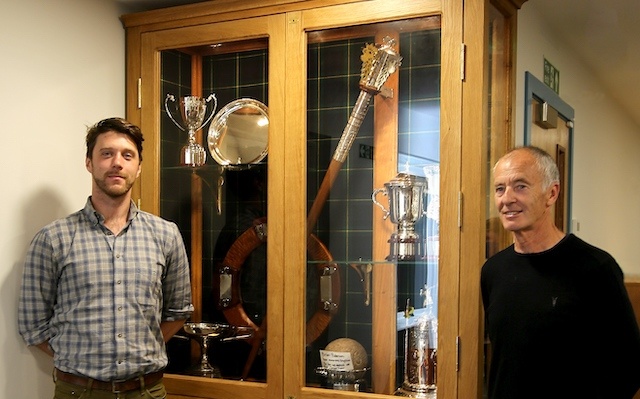 A bespoke piece of furniture has been created by a Deeside craftsman to house historic trophies that are competed for annually at Aboyne Highland Games.

The new trophy cabinet has been produced by Aboyne-born furniture maker Lewis Lilburn, who is also a member of the Aboyne Highland Games committee.

Its creation promotes traditional cabinet making and was made possible thanks to funding Aboyne Highland Games received from the Marr Area Partnership.

Organisers of the 154-year-old event hope the piece, which is on public display in the Aberdeenshire village, will be cherished by future generations.

It provides another permanent link between the annual August event and the village, which already includes the Millennium Gates that stand on the edge of Aboyne Green, the venue for Aboyne Highland Games.

It took Lewis over 300 manhours to design and craft; sawing, chiselling, planing sanding, gluing and finishing the wood to transform it into the substantial piece of furniture.

The display case was constructed with traditional mortise and tenon joints throughout its frame, giving it great strength, and features a cornice topping.

Behind a pair of glazed doors, framed with coved edges, the cabinet’s interior has been designed to accommodate a number of different trophies that have been donated to Aboyne Highland Games over the decades.

The Gordon family tartan lines the interior, acknowledging the event’s chieftain, Granville Gordon, the 13th Marquis of Huntly and his family’s connection to the games.

His grandfather was the event’s founding chieftain in 1867.

Materials for the cabinet were purchased from Scottish business.

The wood was supplied by Logie Timber and Gilmore & Aitken, while the glazing was provided by the Cairngorm Group.

Upholstery and tartan to line the interior were sourced from McEwan of Inverness and Wm Blackhall in Tarland respectively.

Aboyne Highland Games commissioned Lewis to design and build the cabinet owing to his, and his family’s, connection to the event.

The experienced craftsman spent five years studying furniture making and product design, before working in the sector for the past decade.

Lewis is currently working as a self-employed carpenter and cabinet maker in Inverness-shire, supporting the restoration of old buildings on Belladrum Estate near Beauly into a creative hub.

Alongside this, he works on private commissions during evenings and weekends.

“Our new trophy cabinet is an impressive item of furniture which has been beautifully crafted by Lewis using traditional techniques and Scottish suppliers.

“The effort and attention to detail that he has put in to creating it is very evident.

“Using the Gordon tartan for the interior is lovely touch and recognises the role of our chieftain and his family.

“It is a splendid home for some of our historic trophies and will be an heirloom piece of furniture that future generations can enjoy.”

Wood runs through the grain of the Lilburn family.

The woodland was managed by his son Alistair, who along with his son James – Lewis’s late father – established a sawmill to harvest the timber.

An interest in nature, wood and design took root in Lewis as he grew up Coull Estate near Aboyne.

He then completed a BA in contemporary furniture and related product design, before working as part of the design and technical team at a company manufacturing bespoke kitchen and furniture items.

Lewis recently furthered his studies by undertaking an MA in material practice at The university of Edinburgh.

Commenting on the cabinet, Lewis added:

“It was a privilege to be asked to create the trophy cabinet for Aboyne Highland Games, cementing my family’s connection with the event which stretches back decades.

“I hope that my ancestors would find it a fitting contribution to the story of the games.

“The cabinet is an imposing piece and has been constructed with mortise and tenon joints and intricate details, celebrating traditional cabinet making techniques.

“Creating the glazed doors was a bit of a challenge due to their size and the fact that timber tends to move slightly if its moisture content isn’t quite right.

“It meant that a good degree of thought was required before the glass went in.

“In Scotland we are very fortunate to have fantastic materials to work with and it was a pleasure to incorporate some of them into the cabinet.

“I’m grateful to several people for their support and guidance as I’ve brought the initial sketches to life.

“Particular thanks must go to my mother, Irene Lilburn, who helped to get the cabinet installed and looking its best.”

Following its cancellation for the second successive year, Aboyne Highland Games hosted a virtual celebration of the traditional event, which included online piping and fiddle competitions.

The virtual programme can be viewed on the event’s Facebook page by clicking here.

Aboyne Highland Games is next scheduled to take place on Saturday, 06 August 2022.

The Aberdeenshire event, held under the patronage of Granville Gordon, the 13th Marquis of Huntly, attracts crowds of up to 10,000 people each year.

Featuring a programme of traditional highland games events, including highland dancing, tossing the caber, piping and fiddle competitions, the event on the town’s green attracts visitors from around the world and makes an important contribution to the local Deeside economy.

Further information on Aboyne Highland Games can be found by clicking here.