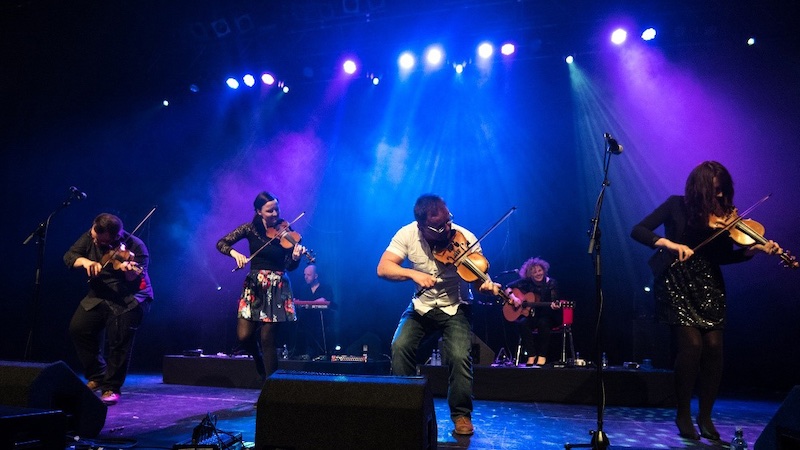 Scotland’s most celebrated fiddle band Blazin’ Fiddles will join together with the remarkable vocalist Hannah Rarity at Eden Court Theatre, Inverness on Sunday 14th August as part of a special one-off Scottish tour this summer.

The six-piece band, made up of Jenna Reid, Bruce MacGregor, Rua Macmillan and Kristan Harvey on fiddle, Anna Massie on guitar/fiddle and Angus Lyon on piano, will celebrate 24 years of touring and recording with this string of special performances in Inverness, Stirling, Aberdeen, Dundee and Dumfries.

Each member of Blazin’ Fiddles draws a distinct flavour of music from their part of the Highlands and Islands.

Blending solo and ensemble sets with the occasional insightful tale, they come together in a fiery blend to deliver an exciting evening of music for all.

“I still pinch myself that we’re at 24 years!

“It was only meant to last for four concerts back in 1998 but here we are 24 years later still going strong.

“I can’t wait to bring this special show to Inverness, and to have Hannah Rarity perform alongside us will be fantastic.

“When the band started in 1998 it was born out of a desire to showcase the Scottish fiddle, in all its guises.

“We drew on influences from all of the fiddle-playing regions of Scotland and put these together in one band; this is why for us, in our 24th year, it is so important to tour Scotland and bring our music to as many areas of the country as we can.

“We hope to see you there!”

Hannah Rarity’s incredible voice imbues the music she performs with a depth of emotion that is inimitable.

It’s this ability that has seen her become one of Scotland’s foremost young singers.

Winner of BBC Radio Scotland Young Traditional Musician of the Year 2018, her status as a rising talent has been further consolidated by her debut album’s nomination for Album of the Year at the 2019 Scots Trad Music Awards, Scots Singer of the Year nominations (2017, 2018) and feature as ‘One to Watch in 2018’ in The Scotsman.

Tickets to the Blazin’ Fiddles featuring Hannah Rarity at Eden Court Theatre, Inverness on Sunday 14th August can be purchased at: https://blazinfiddles.com/gigs

Or by clicking here