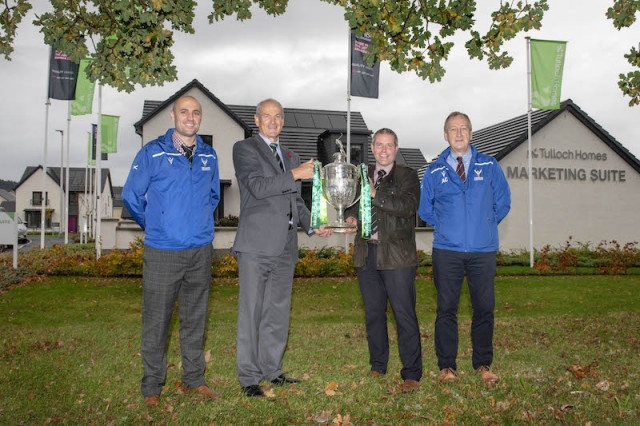 Tulloch Homes has boosted shinty’s recovery resources with a deal to extend its sponsorship of the game’s top prize, the Camanachd Cup, by a further two years.

Following successful discussions with the Camanachd Association, the game’s ruling body, the Highlands’ largest housebuilder is strengthening its involvement through to the 2024 Final.

Tulloch is already committed to sponsoring next year’s Final at The Dell, Kingussie, but the new agreement will also cover the 2023 fixture at Inverness plus the following one at a venue to be determined by the Association.

“That will take us up to supporting a remarkable seven successive Camanachd Finals”, said Tulloch Homes chief executive George Fraser.

“This is in addition to the pandemic year of 2020 when there was no competition but we still contributed our sponsorship to help the game when it faced such a difficult time financially.

“Shinty is part of the fabric of the communities from which we draw our business and our workforce.”

“The 125th anniversary final last month saw a new name, that of Kinlochshiel, on the trophy and going forward the signs are that the Camanachd Cup will be contested by a wider range of potential winners than for some time.

“We’re keen to be a part of that exciting future.”

Tulloch Homes began its sponsorship of the competition in 2017 with Newtonmore beating Lovat in the final.

The same teams contested the next final with Newtonmore again triumphant while in 2019 Newtonmore defeated Oban Camanachd.

Mr Fraser, who won eight Camanachd Cup winners medals with Newtonmore, presented the trophy to Kinlochshiel captain Keith MacRae after their victory over Lovat at Oban.

“The way in which Oban stepped in to stage the final so successfully at short notice, in no small part due to the great work of Councillor Roddy MacCuish, underlines the spirit and strength of shinty”, said Mr Fraser.

”It’s been a pleasure to work with Camanachd Association president Steven Mackenzie plus chief executive Derek Keir and his management team who have shown great flexibility to enable competitions to return and have the season completed.

“The partnership between the Association and Tulloch Homes is strong and successful, which makes us all the more pleased to put in place this extension.

“Hopefully, it gives the Association some certainty and assurance going forward to assist in their planning and development of Scotland’s oldest team sport.”

“We’re absolutely delighted to conclude this new agreement with Tulloch Homes, who have proved to be such a true and trusted friend of shinty.

“They are highly popular sponsors and, of course, George Fraser is a Camanachd Cup legend who is helping to put something back into the game he enjoyed so much.

“This fresh deal comes at the end of shinty’s comeback season and is an ideal tonic for clubs, supporters and Association alike as we look ahead and build for the future.”

“When the pandemic meant there was no competitive shinty in 2020, and thus no Camanachd Cup action, we were absolutely delighted when Tulloch Homes indicated that they would nevertheless sponsor the ‘phantom final’.

“It was an invaluable financial contribution at a challenging time for us.

“This gesture created a widespread volume of goodwill to the company in the shinty communities.

“I’m sure Tulloch’s continued association with the tournament through to 2024 will be warmly welcomed.”