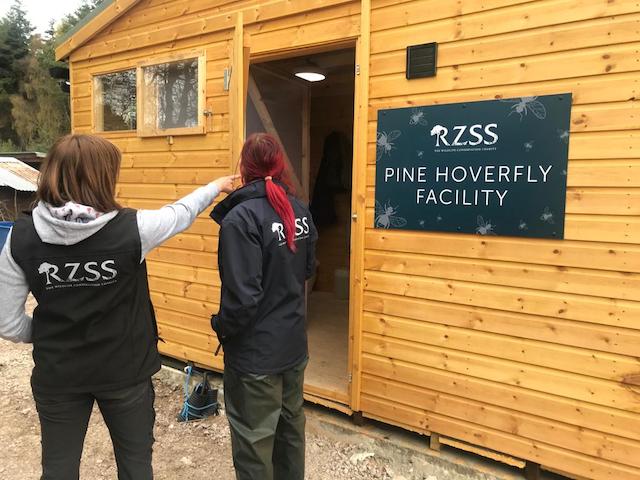 Efforts to protect a critically endangered insect from extinction have been given a boost thanks to a brand-new breeding centre at the Royal Zoological Society of Scotland’s Highland Wildlife Park.

Staff at the wildlife conservation charity say this is a significant step forward for the survival of the pine hoverfly, a native species that has not been seen in the wild in Britain in its adult form for over eight years.

The British population of pine hoverfly is currently restricted to a single site in the Cairngorms National Park and the new RZSS facility will provide vital space for zookeepers to care for more hoverflies than ever before following a record-breaking breeding season in 2020.

“Having this new facility is a total game-changer for our critical conservation breeding programme.

“We are so grateful to our funders for supporting this development at such a challenging time.

“Tiny species like the pine hoverfly are easily overlooked, but invertebrates are crucial to healthy ecosystems and are disappearing at an alarming rate.

“Animals like pine hoverflies play key roles in ecosystems, from pollination to decomposition, as well as providing an important food source to many other species.

“The more invertebrate species we lose, the less well our ecosystems will be able to support the animals that depend on them, including humans.

“We completed the facility just in time to move our pine hoverfly pupae into their new space before they started emerging as adult hoverflies.”

This new pine hoverfly facility was made possible by several funders, including a donation of £20,000 from Marvelous Europe Inc. as part of the campaign for their latest game release STORY OF SEASONS: Pioneers of Olive Town, alongside support from The National Geographic Society, Cairngorms National Park Authority, Forestry and Land Scotland, and NatureScot.

Story of Seasons fans also competed in a seed-growing race to name the larvae room, with the successful entrant selecting the name ‘It Must Have Been Larva, But It’s Hover Now’.

This room will become a temporary home to pupae ‘Larva Croft’ and ‘Pine-al Ritchie’, who were also named by the seed-growing competition entrants.

The pine hoverfly conservation breeding programme is led by RZSS in collaboration with the Rare Invertebrates in the Cairngorms project, a partnership between the RSPB, Cairngorms National Park Authority, Buglife Scotland, Butterfly Conservation Scotland, and NatureScot.