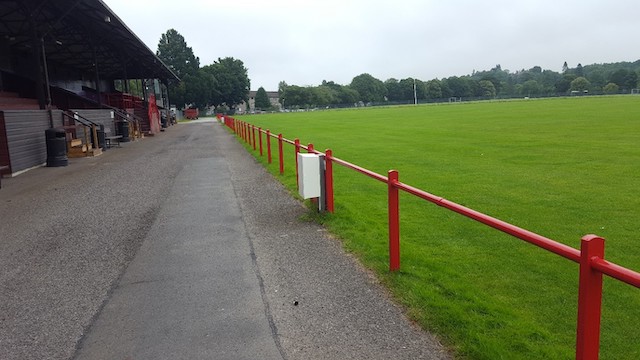 Anyone enjoying a recent stroll around the Bught Park area of Inverness may have noticed that the railings have had a lick of paint thanks to the work of a Community payback team and their supervisors.

As well as painting the perimeter railings around the park area white, red paint has been used to freshen up those around the shinty pitch with enough paint leftover to give the goal posts a coat too.

The job at the Bught was chosen so that workers could make their own way to the site and observe all social distancing guidelines while carrying out the job.

“We needed a relatively central job that the workers could make their way to so the Bught was ideal.

“It was quite a task as all the railings had to be treated with an undercoat before the painting could begin but everyone involved did a great job and should feel pleased with how it all turned out.”

The £439 cost of the paint has been paid for by the Inverness Common Good Fund and all labour was provided free.

Depute Provost and local Ward Councillor Graham Ross is delighted with the work.

“The state of the railing before painting was not great, but the team have done an excellent job and it really has spruced up the whole area.

“I’m sure it has given those doing the painting a great sense of wellbeing to see the immediate improvement their work has had to the park.

“Unpaid Work is not just about punishment, but about improving and teaching people skills.

“This reduces the chance of reoffending as it gives community payback clients a sense of purpose and a notable increase in self-worth.”