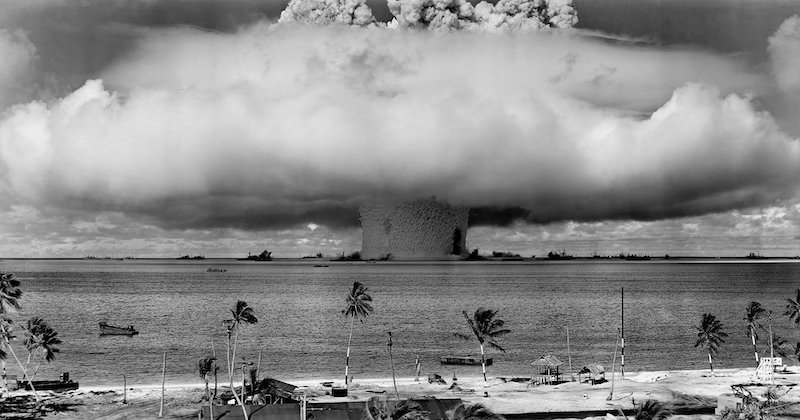 The SNP has said Westminster’s stance on nuclear weapons leaves the UK “badly out-of-touch with the vast majority of nations” ahead of the Entry into Force of the Treaty on the Prohibition of Nuclear Weapons (TPNW) today [Friday].

The Treaty has been signed and ratified by 51 countries, which is enough to bring it legally into force meaning, from this month, countries that have signed will not co-operate or assist any country in remaining nuclear-armed or nuclear-complicit.

However, the UK government is not a signatory to it.

Earlier this week, First Minister Nicola Sturgeon endorsed the Scottish Women’s Covenant on the TPNW, which also enters into force today as the first nuclear disarmament treaty to acknowledge that women are disproportionately affected by nuclear weapons.

The SNP has consistently been a leading voice on nuclear disarmament, while the Tories and Labour support wasting billions of public money imposing new Trident nuclear weapons on the Clyde.

“Although Scotland cannot yet become a party to the Treaty of the Prohibition of Nuclear Weapons, the SNP has been a leading voice on nuclear disarmament for decades – while the Westminster parties’ support for Trident leaves the UK looking badly out-of-touch with the vast majority of nations.

“The SNP has always been firmly opposed to the possession, threat and use of nuclear weapons – and it’s crucial that the Tories and Labour start heeding those calls, instead of turning a blind eye and refusing to scrap the immoral and destructive Trident nuclear weapons system.

“An independent Scotland would be a keen signatory to the Treaty on the Prohibition of Nuclear Weapons – yet Westminster’s single-minded nuclear weapons obsession and the amount of money being wasted on it highlights the democratic deficit that we currently face.

“The only way to guarantee an end to nuclear weapons here is for Scotland to be an independent nation.

“Until then, we will continue to oppose the presence of nuclear weapons in Scottish waters and support the global fight for nuclear disarmament.”

“As the TNPW comes into force I am pleased to put my name alongside Javier Solana and Willy Claes, two former Secretaries-General of NATO, in supporting the Treaty.

“I echo their belief that ‘nuclear weapons serve no legitimate military or strategic purpose’ and welcome this significant step towards a nuclear-free world.

“The events of the past year have shown that nuclear weapons do not keep us safe and that the UK government cannot be trusted to ensure Scotland’s security.

“Harbouring these weapons of mass destruction has lulled the UK government into a false sense of security, seen in their failure to build the kind of national resilience that protects us from modern threats.

“It is clear that the UK government has no intention of removing weapons of mass destruction they store just miles from Scotland’s largest population centre.

“The only way to ensure unilateral disarmament and the removal of nuclear weapons from Scottish waters is through independence.”