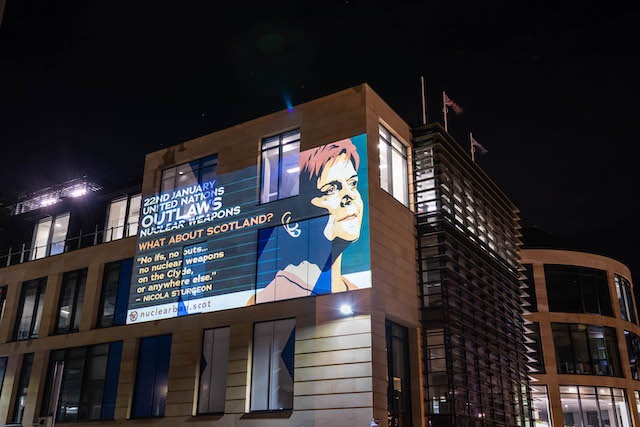 To mark the entry into force today of the Treaty on the Prohibition of Nuclear Weapons campaigners have projected images and slogans onto key Edinburgh buildings, as part of the worldwide celebration.

The images were projected onto the Scottish Parliament, the government building at Victoria Quay, the Tron on the Royal Mile, and, as a special challenge to the UK government which has refused to acknowledge the Treaty, on the new Scotland Office building in New Street.

As well as “The World is No Place for Nuclear Weapons”, the images noted that the Treaty has outlawed nuclear weapons, and that the Scottish government supports it.

The TPNW prohibits the developing, testing, producing, manufacturing, otherwise acquiring, possessing, stockpiling, transferring, using or threatening to use nuclear weapons, assisting other states with these prohibited activities, stationing, deployment or installation of nuclear weapons belonging to other states on a state party’s territory.

The nine nuclear weapons states (including the UK) have not signed or ratified the TPNW but nevertheless it will affect their capabilities and, more importantly, as with other inhumane weapon prohibition treaties and conventions, it is already changing the global perception of what is acceptable.

“The Tron in Edinburgh has long been the place to welcome in the New Year.

“Today’s welcome, written large, is for the UN TPNW; a cause for celebration around the world.

“A clear message of support also shone on the Parliament, the Scottish Office and the new UK government building, QE House: The World is No Place For Nuclear Weapons.

“Campaigners recognise that the Scottish government supports this Treaty, but pressure will need to continue to convince the UK to accede to its demands.”