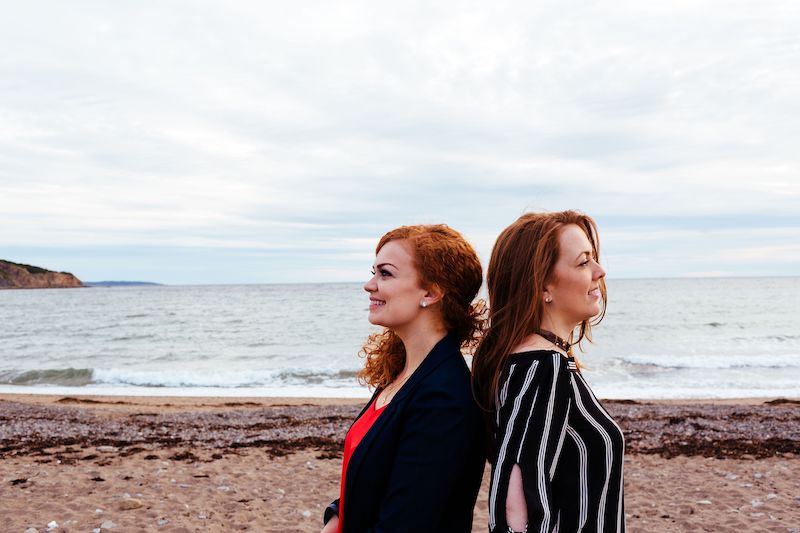 Audiences across the Highlands are set to be wowed by two of Cape Breton’s finest musicians and dancers as they take to the Blas Festival stage for the first time later this month.

Dawn and Margie Beaton (pictured)from Mabou, Cape Breton come from an impressive musical heritage of fiddlers, dancers, and singers and between them, will be delighting Highland audiences with fiddle, piano, banjo, mandolin and dance.

With the regular addition of step dance during a performance and a contemporary approach towards traditional Gaelic music, the Beaton sisters put their distinctive brand on the music they play, whether it be a heart wrenching lament or an exhilarating reel.

Destined to be on the stage, the sisters were dancing by the time they were four and started playing the fiddle a year later.

Over the years they have performed at concerts, cèilidhs and festivals all around Nova Scotia, Scotland, Ireland, France, USA, England, Brazil and China.

“Margie and I are quite excited to make our way back to Scotland.

“It’s been a few years since we’ve performed there, and our first time at Blas.

“The connections between Cape Breton and Scotland have always been very strong, and working for Celtic Colours, the ties between the two festivals are linked right back to the beginning.

“Blas allows us to have performances in various venues.

“We’re eager to bring some Cape Breton fiddle and dance to our shows and hopefully connect with some familiar faces, both in the crowds and on stage!”

The sisters will be performing on four occasions during Blas Festival.

One of the finest, distinctive voices of her generation, Kathleen MacInnes continues to wow audiences both at home and abroad and will perform alongside the Beaton sisters on two occasions during the festival.

Kathleen’s effortless style has seen her gain numerous awards and acclaim over the years and she remains in much demand for cèilidhs, concerts, festival and TV appearances.

Kathleen will be accompanied by award winning musician, producer and composer Mike Vass.

Audiences can catch these talented musicians on 26th November at The Cèilidh Place in Ullapool and Resolis Memorial Hall on 27th November.

Originally formed as part of a project commissioned by Fèisean nan Gàidheal for Blas 2016, Sian make a welcome return to the festival.

Their repertoire focusses on songs by female bards, and showcasing the strength and beauty of Gaelic song.

They are joined by Innes White to create a powerful collective sound.

Blas, which means ‘taste’ or ‘sample’, is organised by Fèisean nan Gàidheal in partnership with The Highland Council and will take place from 22-30 November, culminating in a variety of events across the Highlands to celebrate St Andrew’s Night.

It aims to celebrate Gaelic culture and the thriving Scottish traditional music scene over nine days of concerts, cèilidhs and workshops in venues across the Highlands and Islands.

In a programme which really does offer something for every member of the family, as well as the 20 main concerts and cèilidh, there will also be daytime cèilidhs, a series of song lectures and a special schools programme which will see some of the musicians visit locals schools for performances and workshops.

Other acts at this year’s Blas, which takes place in a variety of venues across the Highlands and Islands, from Aviemore to Barra, include the Gary Innes Band, Tideline’s Robert Robertson and Ross Wilson, Iain Macfarlane and Ingrid Henderson and neo-trad trio Project Smok.

The Highland capital will also host a show by electronic celtic fusion super group, Niteworks, at Ironworks, a partnership between 432 and Blas Festival.

The full programme of events can be found at www.blas-festival.com along with details of how to purchase tickets.