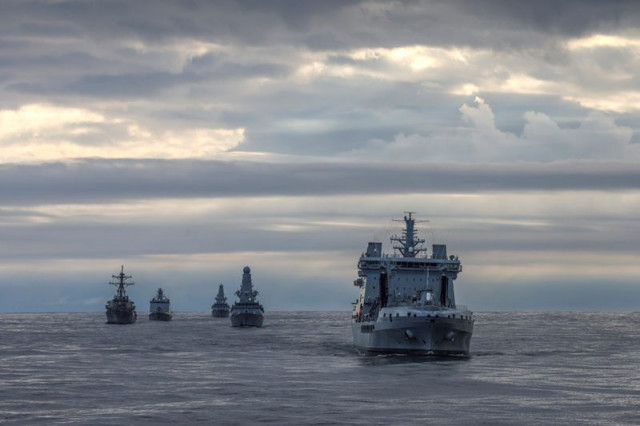 Twenty warships, three submarines and 150 aircraft have taken part in a UK-led multinational military exercise to test the UK Carrier Strike Group’s response to a range of crisis and conflict situations.

Designed to push the Carrier Strike Group to the limits and ensure its readiness for any situation during this year’s seven-month global deployment, Exercise Strike Warrior 21 provided the largest and most demanding assessment it has so-far faced.

Military assets from 10 different nations took part in the exercise off the coast of North West Scotland, which saw ships from a range of partner nations deploy a range of advanced threats against the group.

State-of-the-art F-35 fighter jets conducted missile firings during the exercise, marking the first time British jets have done so at sea for 15 years.

And following the exercise, the UK’s two aircraft carriers – HMS Queen Elizabeth and HMS Prince of Wales – were able to meet each other at sea for the very first time.

“The UK Carrier Strike Group is a great symbol of collaboration, both across the Armed Forces and our industry partners.

“Sailing together through a number of different environments, the partnership will uphold British values and international order.

“By leading a large international exercise, practicing its wide range of capabilities, and demonstrating its formidable size, Strike Warrior 21 has proved that years of hard work, training and planning have paid off.

“The UK Carrier Strike Group is ready to promote Global Britain and confront future security threats of the twenty-first century.”

Strike Warrior 21 saw the Carrier Strike Group pitted against warships from NATO’s Standing Maritime Group 1 to prove it can undertake high-intensity operations in response to a broad range of crisis and conflict situations.

Demonstrating the ability of the strike group to operate alongside NATO allies, Strike Warrior featured forces from Denmark, France, Germany, Latvia, the Netherlands, Norway, Poland, the USA and one non-NATO country, Australia.

This was the final test of the Carrier Strike Group before it sets sail on a maiden operational deployment this weekend that will see it undertake engagements and exercises with more than one fifth of the world’s nations.

Led by HMS Queen Elizabeth, the task group will interact with 40 nations across the Mediterranean, Indian Ocean and Indo Pacific including India, Japan, the Republic of Korea and Singapore.

As outlined in the recently-published Defence Command Paper, the MOD is committed and ready to confront future threats alongside international partners and help seize new opportunities for Global Britain.

A highlight of the exercise included the first missile firings from a British jet at sea for 15 years, conducted by the state-of-the-art F-35 stealth fighters.

In the tests off the west coast of Scotland, the F-35s launched from Queen Elizabeth’s flight deck to intercept a Mirach target drone.

By successfully bringing down two “bogeys” – jet target drones – with air-to-air missiles, the pilots of 617 Squadron (aka The Dambusters) showed how they can protect HMS Queen Elizabeth from air attack during the deployment and demonstrated the potency of the fifth-generation strike fighter.

Proving the ability of the strike group’s differing units to work together seamlessly, HMS Kent and her Wildcat helicopter from Yeovilton-based 815 Naval Air Squadron transferred vital stores to the surfaced Astute class submarine.

Following the conclusion of Exercise Strike Warrior, the UK’s two new Elizabeth-class aircraft carriers HMS Queen Elizabeth and HMS Prince of Wales rendezvoused at sea for the first time as the former returned to Portsmouth.

“Having previously commanded both HMS Queen Elizabeth and HMS Prince of Wales, it was hugely exciting to be present as the two met at sea for the first time.

“I know that sense of pride and accomplishment is shared by thousands of others, military and civilian, who have contributed to the Royal Navy’s carrier renaissance over the past decade or more.

“The strategic significance is profound. Building one aircraft carrier is a sign of national ambition.

“But building two – and operating them simultaneously – is a sign of serious national intent.

“It means Britain has a continuous carrier strike capability, with one vessel always ready to respond to global events at short notice.

“Few other navies can do that.

“Britain is back in the front rank of maritime powers.”