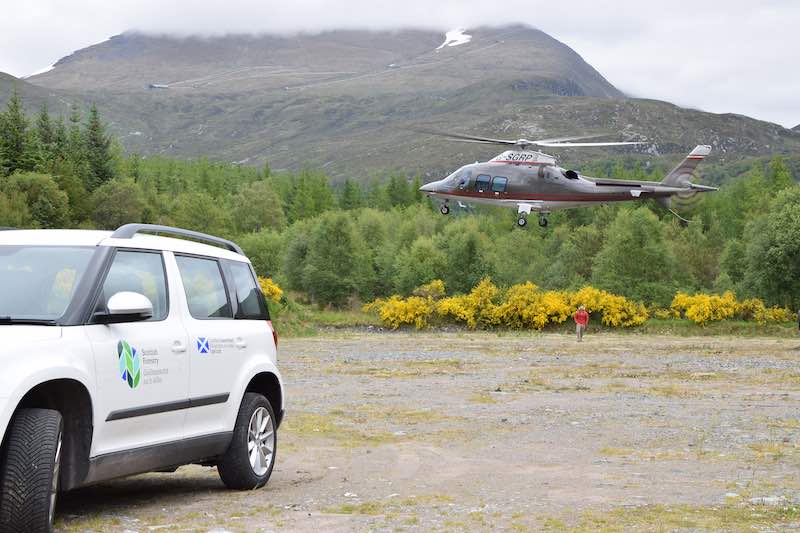 Woodland owners across Scotland are being urged to check their larch trees for disease and report any symptomatic findings.

The message from Scottish Forestry comes as the agency restarts its aerial and ground surveys for Phytophthora ramorum, a tree disease which kills larch.

Due to physical distancing measures, the helicopter surveys will be run at a reduced capacity therefore drones and satellite imagery will be used to gather extra information on the extent of the disease.

Scottish Forestry tree health staff have been out starting ground-based tree health inspections since the start of June.

“Through the Scottish Government’s route map, outdoor work such as forest survey and site visits are able to restart in a careful and considered way.

Follow up site surveys for suspected sites will take place in the summer months with Statutory Plant Health Notices being issued if the disease is confirmed.

To slow down the rate of spread, any infected larch trees are felled, along with any additional larch trees in a 250-metre radius.

The timber can still be used as long as a licence to handle it is obtained.

“Now that forestry operations are restarting, it’s very important that woodland owners across the country take a proactive approach to tackling this disease.

“I would urge woodland managers to undertake their own surveys of larch and report any symptomatic findings to Scottish Forestry.

“We will then follow up with site inspections and advise on the best action to take.”

Phytophthora ramorum has been present in Scotland since 2002.

The main area affected is in the south west of Scotland.

Outwith this area, around 3,600 hectares of larch are believed to be affected out of a total larch resource of 60,000 hectares.

“Monitoring tree disease is a vital activity and it’s good to see these resuming.

“Scotland’s forests are an important economic, environmental and leisure resource, and we will be reminding our members who are out on the ground to keep a close eye on any signs of disease and to report anything they see immediately.”

Forestry and Land Scotland, the agency which manages the national forests are surveying its sites using drones and field staff to obtain early warnings of the disease.

Any suspicious findings will quickly be reported to Scottish Forestry.

The disease can be spread in mud or tree needles stuck to footwear, bikes and vehicles or even on dogs’ paws.

Advice to the public is to “Keep it Clean” and always brush off any dirt before and after visiting a forest.

Any woodland owner who suspects their larch trees are infected should report their findings to tree.health@forestry.gov.scot.

A Scottish map of confirmed infections and a link to a symptoms guide can be found here.