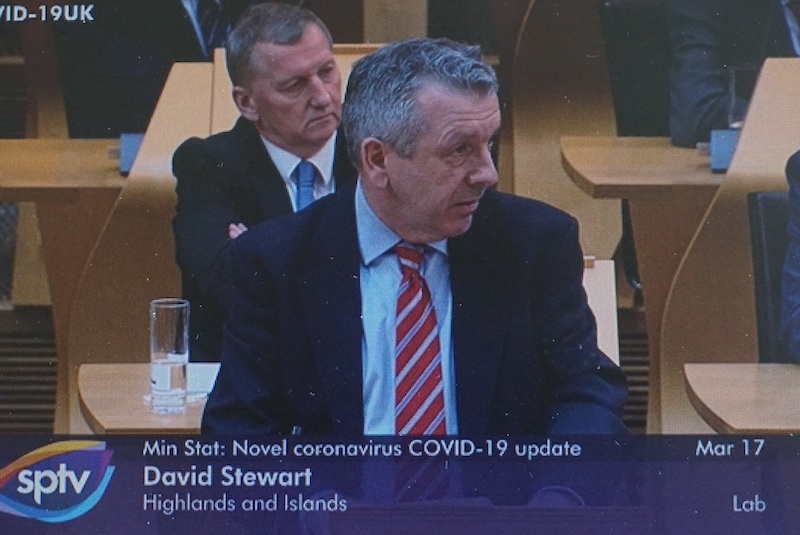 Scotland will follow same pandemic modelling of England where cases of COVID 19 will come in a heavily concentrated burst, Health Secretary confirms.

Highlands and Islands Labour MSP David Stewart, who is also Labour’s Shadow Public Health Minister, asked the Health Minister Jeane Freeman yesterday to re-emphasise the need for self-isolation by confirming that Scotland is anticipating the same “heavily concentrated burst” of COVID 19 cases as predicted in England.

“Does the Cabinet Secretary for Health recognise these estimates for Scotland and share the pandemic modelling?”

Ms Freeman confirmed that Scotland was expected to see the same rise over the same period.

She went on to say that the aim of new self-isolation measures announced by the Scottish and UK Governments yesterday was to bring down those numbers “as low as we possibly can over a long period and to do that in a way that will allow our NHS to manage those who will require their particular treatment”.

“I raised this question because I think we cannot emphasise strongly enough the fact that there is going to be a huge surge in Covid-19 cases here – and all within a very short space of time.

“This is a fight for all of us and we can only do it if we work together in the face of this great challenge.

“We can only hope the massive ongoing effort to persuade people to self-isolate and to make it financially possible for them to do so will stagger the onset of infections as much as possible to reduce this swell so that our NHS will manage.”