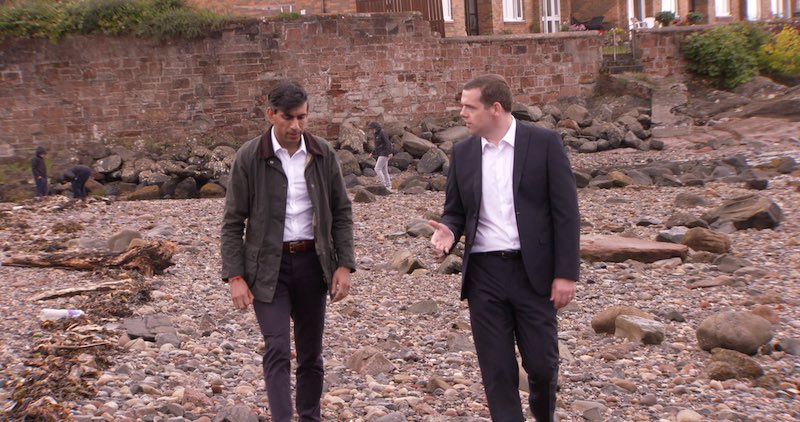 Rishi Sunak (pictured with Douglas Ross) must hand over the missing £375 Million for Scottish firms.

New research from the British Retail Consortium (BRC) suggests overall sales fell by 0.3% in 2020, the worst annual change since 1995.

Non-food sales fell by about 5%, with physical non-food stores suffering a drop in sales of a quarter compared with 2019.

Drew Hendry MP said the Chancellor must deliver more support, including handing over the missing £375million promised to Scottish firms, extending the furlough scheme through 2021, devolving financial powers, and delivering a meaningful fiscal stimulus of at least £98billion.

It follows warnings by the Federation of Small Businesses (FSB) that a quarter of a million small businesses could be forced to close this year due to a lack of government support.

“The SNP has repeatedly warned the Tory government that it is not doing enough to support businesses through the covid-19 economic crisis – putting many firms and local high streets under threat.

“It is crucial that the Chancellor urgently delivers more support, in the form of grants as well as loans, in order to protect people’s livelihoods – or we will see more good businesses go to the wall unnecessarily and unemployment continue to soar.

“We cannot afford more Tory dithering, delays and half-measures when so many jobs and businesses are under threat.

“The UK government must hand over the missing £375million it promised Scottish firms, extend the furlough scheme for as long as is necessary, and follow the example of other countries by delivering a fiscal stimulus package of at least £98bn.

“There must also be meaningful support to boost incomes and help the growing number of unemployed people.

“That must include support for the 3million excluded and a permanent uplift to Universal Credit and legacy benefits – so that no one is left behind.

“The Tory government has withheld investment and blocked the devolution of financial powers throughout this crisis – leaving Scotland to respond with one hand tied behind its back, while other independent countries have been able to utilise the full range of powers.

“It is clearer than ever that the only way to properly protect Scotland’s interests, and secure a strong and fair recovery, is to become an independent country.”