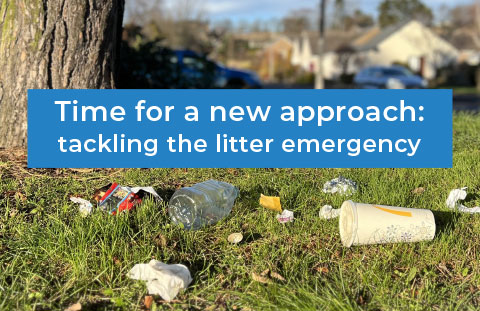 The litter emergency is here, and people are significantly concerned about it states a report published recently by Keep Scotland Beautiful.

The environmental charity has published ‘Time for a new approach: tackling the litter emergency’, an update report which outlines some damning stats from a major survey of streets and a public perception poll.

They call for stakeholders to urgently collaborate and innovate to deliver positive and impactful campaigns, projects and interventions to reduce litter in our communities and reverse the litter emergency we have been warning of.

Two years on from their last report, the avalanche of evidence from our audits from more than two decades, shows a continuing picture of decline.

And, worryingly, the public mood is that the situation isn’t improving; in fact, in our most deprived communities, it is felt it is getting worse.

Key findings outlined in the report include:

“Litter is still being dropped.

“And, the same unsustainable consumption habits and throwaway culture fuelling the twin climate and nature crises are also driving the litter emergency.

“With almost 90% of people asked believing that litter is significant issue of public concern and our technical data showing the largest gap we have ever recorded between litter levels in our most and least deprived communities, this is an issue we must invest in tackling.  And now.”

Once again cigarette litter is the most common item, with it being recorded on 62.7% of all sites surveyed.

But this year we have again recorded the highest percentage of sites with fast food related litter in a decade.

With some of this waste being eligible for the Scottish Government’s Deposit Return Scheme (DRS), currently scheduled to be implemented next August, it provides some insight into the proportion of litter that could be reduced in future.

“The decline in local environmental quality was first reported by us in 2016 across all parts of Scotland.

“Now it is damaging our communities and costing us a significant amount of money annually to address.

“A further delay to real action will only cost us more in the long run.

“We know that the public and key stakeholders want to see more done to reduce litter levels, and this was mirrored in the recent responses to the Scottish Government consultation on a new Litter and Flytipping Strategy for Scotland.

“While we recognise the challenging financial times we are in and welcome the positive progress made in terms of the development of the new strategy – now delayed until early 2023 – we have been clear that the strategy and supporting action plan must be properly resourced in order to be effective, have a positive impact and meet the expectations of communities and other stakeholders across Scotland.

“Despite the depressing evidence, we remain hopeful, and urge everyone to take crucial positive action.

“We all need to consider what we buy, throw away, and how we treat the places we live, work and visit.

“Only by changing our own behaviours can we keep Scotland beautiful.”

Tackling the litter problem in Scotland will also help us solve the global climate and nature crisis so we urge everyone to join us to make our country litter free: take part in a litter pick, sign up to Spring Clean, do your own survey or help us share the message that littering is unacceptable.