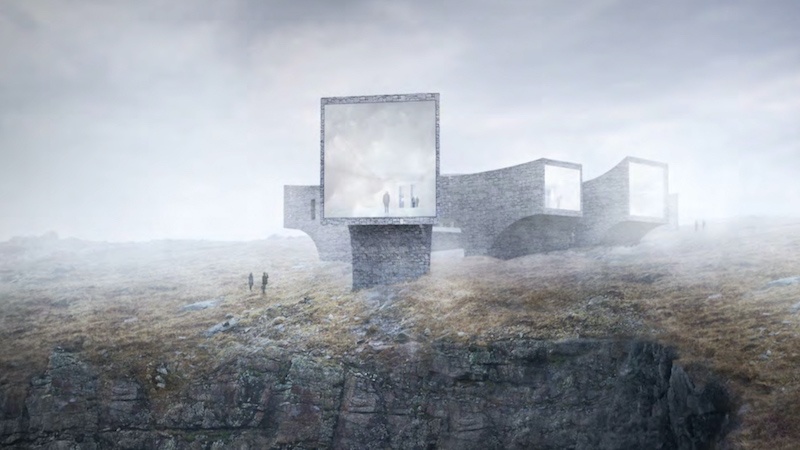 A new BBC ALBA documentary tells the inspirational story of a community’s vision to build a world-class visitor centre to celebrate the history of St Kilda.

In 2009, four public bodies and the National Trust for Scotland promoted a competition to create and locate a heritage centre in the Hebrides which would celebrate the human and natural environment of St Kilda.

The final decision was unanimous.

Their preferred main site was in Uig, in the Isle of Lewis, on a cliff edge where an abandoned radar station once kept an eye on the Western approaches.

However, the capital funding required was not forthcoming and the arduous task of developing the project was left to a local committee, who have stuck with the task.

The National Lottery, also reluctant to invest in a project which was literally “on the edge” encouraged a phased approach which Ionad Hiort Ltd (The St Kilda Centre company) adopted.

Planning approval has been secured for the first phase – A Chiad Cheum – costed at around £2 million.

“Their plans are hugely ambitious.

“A total price tag in the region of £5.5 million, with a world-leading architect delivering a concept that will bring great opportunities to remote villages that have struggled with depopulation and a changing demographic.

“The documentary follows the creative everyday challenges that one community faces, at a time when public funding does not always favour those living on the very edge of Europe.

“The determination shown by the people of Uig, in trying to create an iconic landmark, is a real human story worth following.”

The new centre is being designed by multi-award-winning Norwegian architect, Reiulf Ramstad, who shares his vision for the project.

He has designed numerous ground-breaking structures and buildings across Europe including The Whale Visitor Centre and Trollstigen Visitor Centre, in Norway.

The Scottish Architects supporting this ambitious design are Dualchas, based in Skye and Glasgow.

Reiulf Ramstad draws from nature for the design and appreciates the unique qualities of St Kilda, a UNESCO World Heritage Site.

Since childhood he has held a passion for maps, and his first visit to the Uig site in Lewis was, in his own words, “like entering dreamtime”.

His designs have taken inspiration from the archaeology of Celtic brochs.

Also, while considering a modern interior of the building concept, he said:

“We proposed an interior space as a kind of lens, where the distant silhouette of St Kilda would project itself onto a large glass window.”

Iain Buchanan, chairman and director of Ionad Hiort Ltd, a crofter who lives in the village of Mangersta, close the proposed site, also features in the programme.

Iain has led the campaign over the past 10 years.

“Like many in the district of Uig I’d like to see an ambitious and bold development plan that can shape the next generation’s future.

“I believe passionately in the concept designs for The St Kilda Centre, but I also realise this project was never going to be straightforward.”

Australian born composer and musician Jessica Danz produced the highly evocative piano and vocal soundtrack for the programme, which was inspired by the emigration story of 36 St Kildans who left the islands bound for South Australia in 1852.

Only half of them survived the journey.

Ionad Hiort – Oir an Dòchais /St Kilda Centre – Edge of Hope is on BBC ALBA on Tuesday, March 3 at 9pm and will also be available on the BBC ALBA iPlayer.