Exhibition of Paintings by Donald Jack 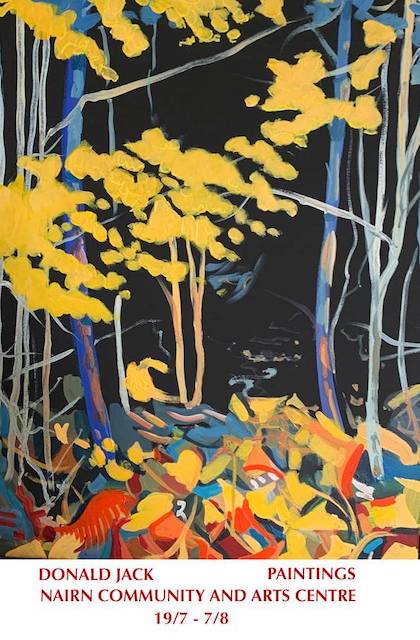 Donald had this to say:

When you tell people that you are a painter, they often ask – what do you paint?

But there is a certain truth in that.

The practice of painting for me is about juxtapositions of shape, colour, tone etc, the formal stuff.

The subject matter is not irrelevant but it is variable and serves as a prop to put down shapes, colours and tones.

I did toy with abstraction back in the late seventies but I have found that, although the formal elements were what was important to me in the act of painting, having representational subject matter served also to attract and interest the viewer and satisfy what seems to be a general need to recognise and relate to the world in paintings.

Creating images is a basic form of communication at a sometimes-subtle level and finding the balance between subject matter [what’s it meant to be?] and the subtler, subliminal messages is the painter’s task.

Growing up in Argyll and spending most of my life in the Highlands I have always delighted in the environment but landscape painting seemed always a daunting project.

The wildness, the scenic splendour and so on are awesome but, for me, just fine as it is without trying to paint it.

In any case, others have done this exceedingly well.

But recently I found myself a niche, while walking around forests near my home in Ardersier.

This interest began in autumn and what attracted me was the mysterious quality of light shining through the trees.

The motif was usually the same – lots of verticals but with great variety and interest in the negative spaces between the tree trunks.

I felt also there was enough for the viewer to relate to in this.

I like to use digital technology as a tool for processing images so it was easy to take photographs with my phone and process them until I had an image I could paint.

I also began to paint on black surfaces, canvas and board.

This not only gave me a new impetus in the way I painted but added to the dark mysterious shadows of the forest in late afternoon, particularly.

For a period of 7 months or so all my paintings were of the woods.

Now, I am not an expert on varieties of trees but have been concerned more with the atmosphere of the forest.

Sometimes the interlacing patterns of branches and twigs with the light between them tended towards a stained-glass effect and nodded towards abstraction.

The colours and shapes of dead bracken, ferns and other undergrowth often formed a base for the columns rising out of them.

Here I had a subject of seemingly endless variety on my doorstep, or at least within a couple of miles of it, which satisfied my need for a framework to create these aforementioned juxtapositions of form, tone, texture and colour I wanted to paint.

The forest is a place of beauty but also of mystery and the scene of dark deeds in tales.

There is comfort and identity to be found in the woods but also variety and simple joy.

I hope to have found and expressed some of these qualities in my painting.

And hopefully the viewer will see more than I consciously contributed in my manipulation of pigment.

Finding inspiration and encouragement in the works of Ivan Shiskin and the American Tonal Impressionist painters, I liked to work quickly and spontaneously in acrylic.

This collection of over twenty forest paintings and will form the bulk of an exhibition at Nairn Community and Arts Centre from 19th July to 7th August.

He has worked as an art restorer and teacher.

His other interest is in music -building and playing instruments.