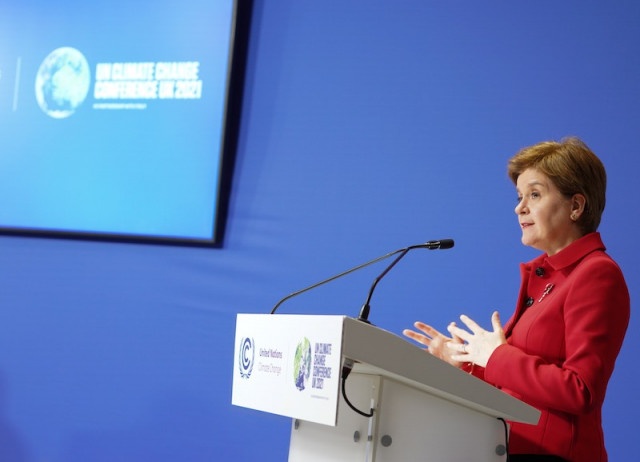 Commenting on the agreement of the Glasgow Climate Pact at the conclusion of the UN Climate Conference COP 26, First Minister Nicola Sturgeon (pictured) said:

“Glasgow should be very proud of the warm welcome that it has given to COP26.

“The city has truly risen to the occasion and played its part by welcoming thousands of delegates, representatives, scientists and climate activists from around the world.

“I also want to thank and pay tribute to the efforts of the UN, the UNFCCC led by Patricia Espinosa and COP26 President Alok Sharma and his negotiators for their hard work and commitment.

“The Glasgow Climate Pact does not contain everything that every country wanted and there is understandable disappointment that key issues were watered down in the final hours, but there can be no doubt that the Glasgow summit has made progress on some important issues.

“The importance of capping temperature increases at 1.5 degrees is no longer questioned and the need for countries to come back next year with higher contributions to tackling emissions may just be enough to keep 1.5 alive – if countries including Scotland really do deliver on our commitments.

“There have been significant commitments to double finance for adaptation, to take action on methane and deforestation and the beginning of proper recognition of the loss and damage that is being experienced by countries particularly in the global south.

“Those countries compromised on their needs today to make progress and we must not let them down.

“Over the course of COP26 Scotland has put £2 million on the table for loss and damage and, in doing so, we have become the first developed country to step up.

“Our action has already galvanised $3 million dollars of philanthropic funds to add to our contribution and a further one million euros from Wallonia.

“Developed countries can no longer in good conscience ignore this pressing moral issue.

“The demand for financial support for loss and damage must be met and I am determined that the Scottish Government will continue to support countries to achieve a financial outcome on this issue ahead of COP27.

“There is also recognition for the first time, although it is deeply disappointing that due to last minute interventions by China and India it is not as strong and clear as it should be, of the need to reduce reliance on fossil fuels, a journey Scotland has already embarked on – and needs to accelerate – in a way that is fair and just.

“Outside of the formal negotiations, states, regions and countries like Scotland – as well as cities like Glasgow – have boosted our collective ambition to reach net zero by 2050 and earlier where possible.

“Scotland has led the way with commitments to make sure women and young people are central to our efforts to tackle the climate crisis.

“While there has been much positive progress, there is no escaping the fact that COP26 has not delivered as much as global south countries, activists and campaigners rightly demanded and I firmly believe that the leaders of the rich developed countries must go further.

“In particular, the failure to close the gap and deliver the $100 billion commitment in full was not a lack of funds but a lack of political will.

“I have heard the disappointment of a number of vulnerable nations.

“There was more that could be done to deliver climate justice and every day of the next 12 months the UK Presidency must be focused on securing what has been agreed, ensuring historic promises do not go unmet and taking the necessary steps to put the world firmly on an irreversible path to capping temperature rises at 1.5 degrees.

“Where COP26 has succeeded, the pressure from young people, the global south and activists around the world has been critical.

“Where COP has more to do, it is leaders who must shoulder the responsibility.”