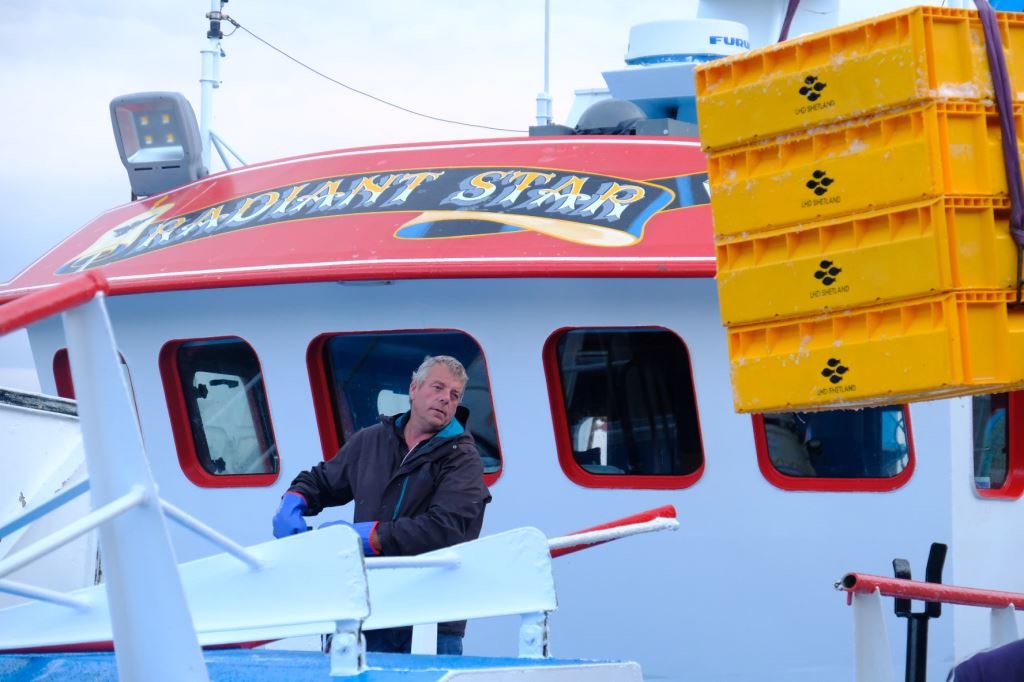 Pictured: Skipper Victor Laurenson oversees the off-loading of boxes from the hold of the Radiant Star LK-71 to the quayside at Scalloway Fishmarket. (Picture Credit: SIC)

The first catch of whitefish was landed last night at the new Scalloway Fishmarket by local trawler Radiant Star – LK71.

The 23 metre Hamnavoe-based vessel landed 251 boxes of whitefish at around 8pm last night, including whiting, cod, haddock and hake, caught off the west side of Shetland yesterday.

The boxes were stored overnight in the chilled fishmarket and sold early this morning at the electronic Shetland Seafood Auction.

The new Scalloway Fishmarket offers around double the floor area of the previous fishmarket, and has been built on the same site as the previous building, parts of which were around 40 years old.

Construction of the £5.6M premises was substantially completed at the end of 2019 and handed over to Shetland Islands Council in early 2020.

In recent weeks, the final tasks to meet food hygiene requirements have been completed along with other minor works, such as floor lining and fitting of fixtures.

In June 2020, Scalloway Harbour won the title of “Fishing Port of the Year 2019” at the Fishing News Awards, partly in recognition of the high level of service offered to harbour users during the redevelopment of the fish market.

Andrea Manson, Chair of the Council’s Harbour Board, said:

“I’m very pleased that the first whitefish boxes landed at the new Scalloway Fishmarket are from a local boat, and I’d like to congratulate skipper Victor Laurenson and the crew of the Radiant Star for being the ones to achieve this landmark.

“The newly rebuilt and expanded fishmarket is a significant asset to the local whitefish industry and I hope we’ll see many more boxes landed here for many years to come.”