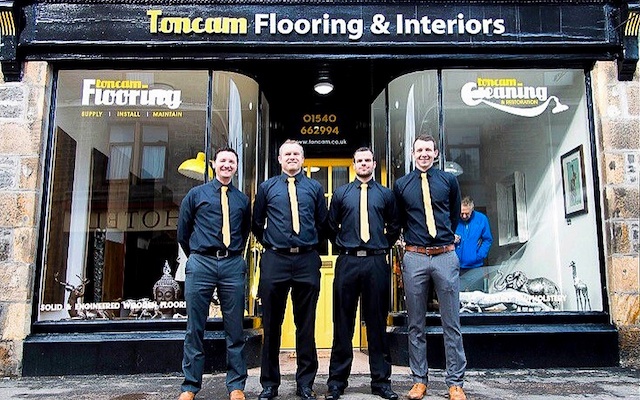 Kingussie-based flooring and interiors business, Toncam, is reinvesting thousands of pounds back into the business after claiming research and development (R&D) tax credits through R&D tax specialist Access2Funding.

A number of projects within the business were identified as being eligible for HMRC’s R&D tax credit scheme, including the company’s creation of its own product made from locally-grown Douglas Fir and Scottish Larch.

“Timbers like Douglas Fir and Scottish Larch can be susceptible to movement as a solid plank flooring, due to things like moisture, humidity change and temperature, meaning that they are not really suited for underfloor heating.

“We wanted to develop a timber in an engineered format so that it would make it far more stable.

“We pursued the idea because we identified that there was no similar home-grown timber product available on the market.

“We knew that it would be popular among architects and there would be a market for it as a home-grown timber flooring.

“Not only this, but the way of production would have a much lower carbon footprint than other timber options.

“It has also been created as a sustainable timber.”

There were many technical uncertainties within this project, including the need to test for trial and error with their manufacturing partner.

Getting the timber to the correct moisture content was a challenge, as was achieving the correct aesthetics.

This meant that the project qualified for R&D tax credits.

“We found the claims process so easy – we are currently going through our second claim with Access2Funding!

“It was much quicker and easier than we expected.

“To be honest, at first, I wasn’t sure because I wasn’t familiar with R&D, and I wondered if it was legit, which of course it certainly was.

“At the end of the day, if there’s money to be claimed, particularly in this current climate then it’s worth doing.

“We are now looking at further ways to expand the business and every penny counts when it comes to investing in the future of your business.”