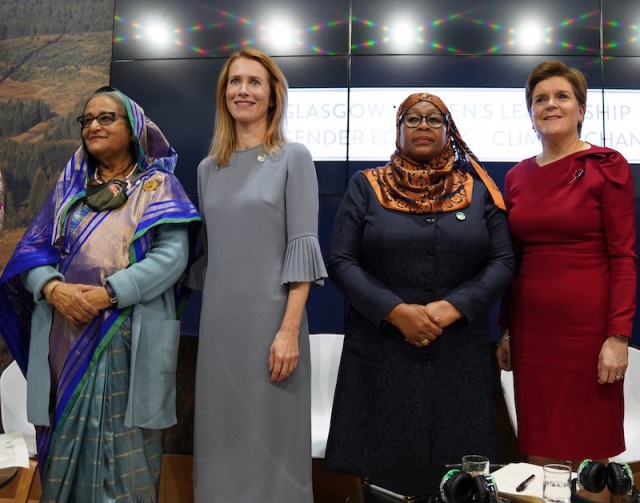 A statement calling for the role of women and girls to be advanced in addressing climate change has been launched at COP26, jointly-sponsored by the Scottish Government and UN Women.

The Glasgow Women’s Leadership Statement on Gender Equality and Climate Change commits to further strengthening efforts to support women and girls to lead on addressing climate change at community, national, and international level.

It recognises that women and girls are often disproportionately affected by climate change and face greater risks and burdens from its impacts, particularly in situations of poverty.

The statement will remain open for signatures from today until the 66th meeting of the Commission on the Status of Women, to be held in March 2022 with a focus on women’s empowerment in the context of climate change, the environment and disaster risk reduction.

The panel discussed gendered impacts of climate change and the importance of women and girls’ leadership in addressing these.

“I am delighted to convene the Glasgow Women’s Leadership Initiative with UN Women, to put gender equality and climate change at the very forefront of COP26.

“One of the great injustices of the climate crisis is that the people and countries who are worst affected are those who have contributed least to its causes.

“That includes women and girls, with girls more likely to be taken out of school, and women less able to find alternative forms of work as a result of climate impacts.

“The Glasgow statement recognises that the leadership of women and girls is essential to ensure global efforts to tackle climate change succeed.

“With strong partnerships between governments, businesses, and civil society we can enable more women and girls to lead on the solutions we need to address climate impacts and promote gender equality.

“I am determined that Scotland will lead on progressing this at home and internationally where we can, and I call on all leaders to join me in signing up to the statement.”

“We can only achieve our collective goal and responsibility of reducing emissions to limit temperature rise to 1.5 degrees Celsius if women and girls are part of the response.

“Today’s statement is a powerful tool in sustaining the growing momentum of women’s and girls’ leadership and innovation in climate action.

“I call on women leaders to make concrete commitments by signing it.”

“Empowerment of women and girls is a priority for Estonia also in our UN work.

“We need to recognise at the highest political level that especially in fragile and conflict-affected settings women and girls are particularly vulnerable to the negative impacts of climate change.”