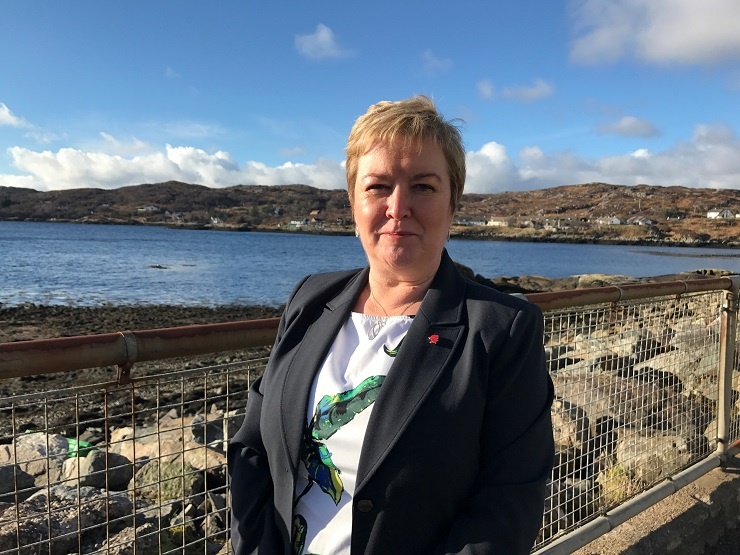 The Cabinet Secretary for Transport, Infrastructure and Connectivity appeared before the Petitions Committee to answer questions and provide evidence for the fourth appearance of a petition submitted by Benbecula Community Council asking for centralisation plans to be halted until an independent investigation can be undertaken.

Mrs Grant attended the committee and posed questions to the Minister on points of resilience, costs and staffing.

She challenged Mr Matheson as the person who gives final approval for the Board’s proposals as being uninterested in the detail, technicalities and impacts on communities as a result of the project.

Mrs Grant gave the minister a stark warning by saying:

“I can’t impress on you enough that you should be taking a very close interest in this, because it will be you that’s held responsible.

“You’ve already presided over the ferry fiasco, this is going to be another fiasco.”

“I don’t think any politician; any cabinet minister wants to be blamed for the economic damage that this is going to cause.

“Given that you will ultimately sign this off I ask that you go back to HIAL and you ask them to stress test their radar to tower option and see if that is an option.

“If people really saw that both systems were being compared and contrasted for resilience, safety and for economic impact it would sit a lot better.

“We really believe that this is not the best option”

Mr Matheson repeatedly quoted HIAL and asserted that the decision had been taken in December 2018 by the HIAL Board and that it was would be irresponsible for him to second guess that decision.

“Michael Matheson was a stuck record at the petitions committee and no question, no argument, no logic could sway him from the root line he has been fed by HIAL – that no other option tackles all the fundamental issues that need to be addressed.

“The problem is that this line just proves how disengaged he is from the project, and shows that at best he is acting as HIAL’s puppet as opposed to a responsible Minister with oversight.

“Despite what HIAL is trying to convince people of, and what Mr Matheson seems happy to believe instead of properly interrogating a community altering plan, there are effective alternatives, and all of my other colleagues who attended the committee comprehend this.

“The fact that the minister doesn’t, at this point just comes across as prideful stubbornness.

“The fact is that staff do not want this and communities don’t want this.

“Both have offered to work with HIAL and Michael Matheson with regard to find better solutions to the problems being faced, and those solutions are easy.

“With a combination of radar – which is likely to have to be introduced anyway – and effective local recruit and train programmes which have already been proven effective by HIAL in the past, the costs and impacts of upgrading ATC services could be halved.

“Unfortunately, HIAL made up its mind in 2015 and Michael Matheson is too intimidated to appropriately challenge it.”

“Michael Matheson claims that staff issues in HIAL can only be addressed by moving them to Inverness – the only area with ongoing recruitment issues – and that we can’t trust the 30 plus staff who have said they don’t want to move to know their own mind.

“Staff retention levels are challenging because they are treating their staff abysmally.

“That is not going to be solved by pushing this through, it’s going exacerbate the problem.”

During an hour and a half of questioning, Committee members questioned the Scottish Government’s faith in the consultancy report which had been provided by Helios which had not only already been proven factually inaccurate, but had also stated that the ATMS project was the costliest and riskiest.

The Cabinet Secretary insisted there had been interrogation of the project proposals, with a focus on the loss of jobs from rural and fragile economies when they were first proposed in 2015 but didn’t provide details of the reassurances

He asserted that mitigating policies for the damage caused would be implemented, including a policy on commuting and the creation of a “FISO Centre of Excellence” in Benbecula.

“I am flummoxed by the central belt centred logic that Mr Matheson is implementing here.

“The realities of commuting from the likes of Stornoway or even Shetland to Inverness are unmanageable – and that’s even before HMRC’s promises of hitting the commuting costs with tax.

“And with regard to the proposal of a FISO Centre of Excellence that they are boasting about delivering, I hope he knows that islanders are not stupid.

“Aside from this being a payoff for one affected community to try and quash their concerns, it’s an olive branch to the MOD and QinetiQ to try and relay objections coming from that quarter.

“It shows a powerful lack of imagination and ambition for our rural areas which are trying to grow their air traffic businesses.”