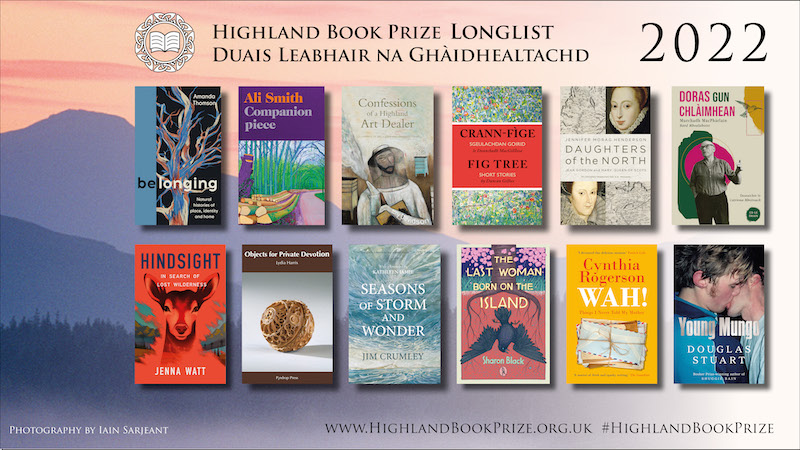 Moniack Mhor, Scotland’s Creative Writing Centre, and The Highland Society of London have recently announced the Longlist for the 2022 Highland Book Prize

The Highland Book Prize celebrates the finest work that comes from, or is inspired by, the Scottish Highlands.

Presented by the Highland Society of London, and facilitated by Moniack Mhor Writers’ Centre, the prize seeks to recognise the rich talent, landscape, and cultural diversity of Scotland’s Highlands and Islands.

12 titles have been selected from 81 submissions for this important literary award.

The range of titles on the list includes personal, cultural, and ecological explorations of Highland landscapes and human relationships, across non-fiction, fiction, and poetry.

Submissions were also invited from authors, writing on any subject, who were born or brought up in the Highlands or have made the area their home.

Each entry was reviewed and scored multiple times by a volunteer panel of over 100 readers from around the world.

The 2022 longlisted titles are:

The titles on the list will now be considered by the Judging Panel, who will announce the shortlist in April 2023.

The winning title will be awarded in May 2023.

Alex Ogilvie remains as Chair of the panel from previous years.

He is joined this year by judges Kapka Kassabova, poet and writer of fiction and narrative non-fiction, whose bookBorder (Granta) won the 2017 Highland Book Prize; Mark Wringe, Senior Lecturer in Gaelic Language and Culture at Sabhal Mòr Ostaig, University of the Highlands and Islands; and Peter Mackay, poet, lecturer and broadcaster, whose 2020 collection, Nàdur De (Some Kind of) was longlisted for the 2020 Highland Book Prize, and who was recently named Bard of An Comunn Gàidhealach at the 2022 National Mod.

“The Highland Book Prize continues to go from strength to strength.

“The spread of genres represented is diverse and exciting.

“It’s good to see the area as something more than a source of inspiration – it demonstrates the breadth of high-quality work published by leading UK publishing houses alongside independent presses.

“The list includes authors who have achieved real literary success as well as new voices and the prize, in its fifth year, places the Highlands as geographically, culturally, and artistically important to the UK’s wider literature sector.”

Alex Ogilvie, Trustee of the Highland Society of London, said:

“The quality of this longlist is a reflection of the continued strength and variety of books written in and about the Highlands and Islands of Scotland.”