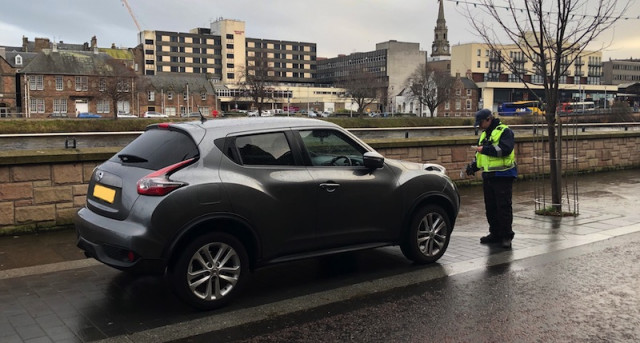 Just with you think you’ve seen it all and things couldn’t get any worse in these troubling times, they have.

I attend holy mass on a Sunday morning at St Mary’s on Huntly Street in Inverness and have done so since 2008.

I have never been targeted for parking in front of the church for attending holy mass until this last month.

Parking is limited in front of St Mary’s and there is no choice but to park where you park.

Unfortunately, congregations are getting older and some can find it difficult walking distances to attend the service.

The targeting of worshippers on Huntly Street started in November and I have now received two parking enforcement tickets while attending holy mass on Sunday mornings.

Given the previous non-enforcement of any apparent parking restrictions, I believe that custom and practice has been that the parking that myself and others have done recently is no different from any time over the past 13 years.

As such, I will not be paying these tickets and will be taking the matter up with Highland Council’s Chief Executive.

I challenging the parking enforcement officer and asked him what he was doing ticketing parishioners’ cars, to which he replied they were parked illegally and he inferred he was doing his job, I also asked was he anti-catholic to which he did not reply.

I challenged him on the basis that many people throughout history have claimed that they were only doing their jobs, especially when seeking to disagree with views other than their own.

He did not reply

I have long suspected highland Council of being institutionally sectarian and this only reinforces my belief that they are.

One of my questions to the council will be “what other religious groups have been similarly targeted in November and December 2021?”

Being of Irish Scottish decent and a catholic, I have come across prejudice before, but I thought these days were in the past, but it would appear that this is maybe not the case in the Highland Council area.

What is particularly upsetting is that we are approaching one of the most important events in the catholic calendar, the birth of Christ.

This, along with everything that has happened and the challenges we have faced as a nation over the last year, means that people’s faith is more important to them now than it ever was before and they should not now be targeted for practicing their religion and attending holy mass.

On checking, the parish priests confirmed that they were not made aware by the Council that tickets were being issued to their parishioners for attending mass so it appears that the powers that be have decided that a conciliatory approach was not the way – just wait until they are in church and issue the tickets

Commenting a parishioner who received an enforcement ticket but didn’t want to be named in case of reprisals said:

“There is limited parking to attend mass on a Sunday, it is very important to attend mass and practice our faith, Highland Council should be more lenient and understanding, there should maybe be a free hour or suchlike for parishioners so that they can attend mass without any repercussions.”

I will be also be contacting my local MP and MSP on this very serious matter.