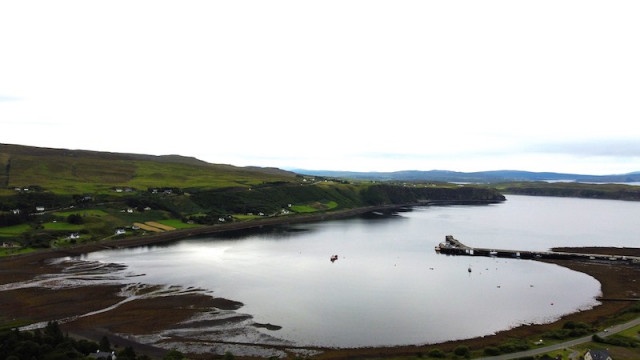 The harbour at Uig, Isle of Skye

Highland Council has welcomed the commitment by COP26 leaders to end deforestation by 2030.

The Highland region is home to some of the last remaining rainforests in Scotland, including Ben Shieldaig in Wester Ross, Loch Arkaig Pine Forest in Lochaber and Uig Wood on the Isle of Skye.

Through the Alliance for Scotland’s Rainforests (comprising a diverse group of organisations and public sector bodies) the Council is committed to working with partners such as the Woodland Trust, Forestry and Land Scotland and the Scottish Government to protect these areas, which also include Crinan Wood and Dunollie Wood in Argyll.

The Woodland Trust is investing significant resources in the expansion and protection of Scotland’s rainforest.

The Trust manages the chain of five woodlands on the west coast, all of which have unique rainforest characteristics.

Whilst each site is being managed to conserve this rare habitat, the native pinewoods of Ben Shieldaig and Loch Arkaig are especially significant – native pinewoods make up only 3% of woodland found in Scotland’s rainforest.

“Only 30,000 hectares of rainforest habitat remains in Scotland, mostly in small woodlands such as those in Skye, Lochaber and Wester Ross.

“But these are not large enough to be self-sustainable, we need to help.

“Highland Council is a key partner of the Alliance for Scotland’s Rainforests, given that most of them are found within our region.

“We absolutely welcome today’s pledge by world leaders to end deforestation by 2030 and we will fully support our partners and the Scottish Government to enhance our existing forests and continue their growth elsewhere.

“Highland is home to some of the most stunning woodland in the UK and we must look after it.”

Environment Minister for the Scottish Government, Mairi McAllan today said that Scotland’s rainforest will be restored and expanded as a natural solution to the climate emergency.

Supporting the restoration and expansion of the rainforest will be a key part of a £500m investment in Scotland’s natural economy.

The investment includes expanding the nature restoration fund, supporting the creation of a new national park and local nature networks, protecting and restoring Scotland’s Atlantic rainforest and ancient woodlands, and investing more in the restoration of peatland and expansion of woodland.

“Scotland is home to its own Atlantic rainforest boasting a variety of rare species and habitats.

“We want to protect and expand this precious environment and we have committed to do so in the life of this Parliament.

“I welcome the Glasgow Declaration’s strategic vision which recognises that forests and woodlands have a crucial role in reversing the effects of climate change and nature loss.

“As an active global citizen, Scotland is playing its role with world-leading ambitions in reaching Net Zero by 2045, five years before the rest of the UK.”

“Our forests and woodlands are an important net carbon sink, absorbing around 6.2 million tonnes of CO2 every year – equivalent to almost 10% of Scotland’s gross greenhouse gas emissions.

“As world leaders commit to end deforestation by 2030, we are planting 80% of the UK’s trees and making bold commitments like this to protect and enhance Scotland’s own temperate rainforest.

“By then, we will be planting 36 million new trees every year in Scotland.”