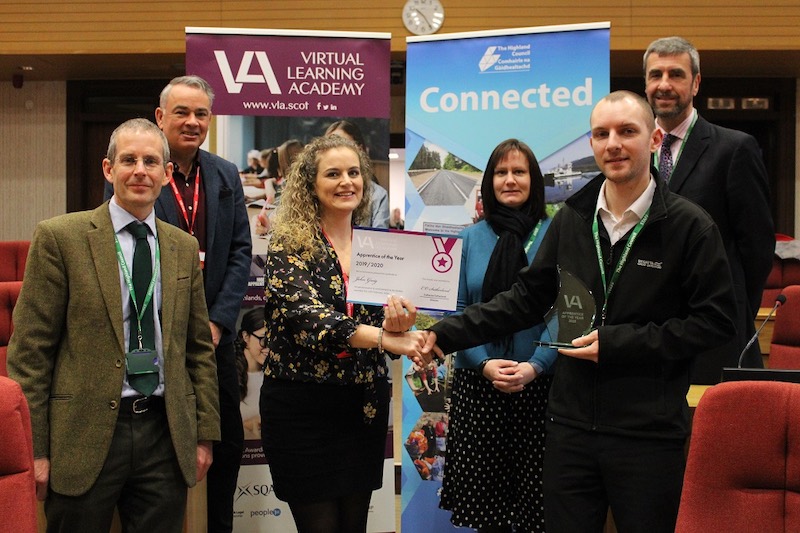 Highland Council Digital Support Officer John Greig has won the Apprentice of the Year 2020 in an awards programme run by the Virtual Learning Academy.

The latter, which he won, was the top award.

Mhairi Quinn, John’s VLA Learning Consultant said: “John achieved his (SCQF 6) through his hard work and dedication, and did so in an impressive 8 months.

“John’s commitment and skills were clearly shown within the outstanding work he produced throughout.

“John showed a willingness to push himself and not take the easy route and produced work to a very high standard in all the subjects that we chose.

“John achieved every deadline set, usually early and was a pleasure to work with throughout the process.”

John started with Highland Council in April 2019 on the Youth Trainee scheme, where he was given the opportunity to work in Digital Services under the supervision of the Council’s Digital Services Manager, Robert Newman, during his time on the YT programme he was given the opportunity to do the Modern Apprenticeship with Virtual Learning Academy for IT & Telecommunications, which he finished within the timeframe of his 12-month Youth Trainee programme.

He was also nominated in the Highland Council Quality awards and was successful in becoming the Trainee of the Year and has recently been successful in gaining the MA post for Digital Support Officer, where John will continue to develop in his role.

“There are two things required for someone to be able to develop and progress.

“Firstly, there needs to be an opportunity.

“Secondly, and most critically, the opportunity must be recognised, and the person concerned needs to have the capability and desire to seize the opportunity.

“John has this in spades.

“His enthusiasm, dedication to his studies and all-round approach means he has developed into a valued member of the team, earning himself a full-time position that offers more opportunity in the future.”