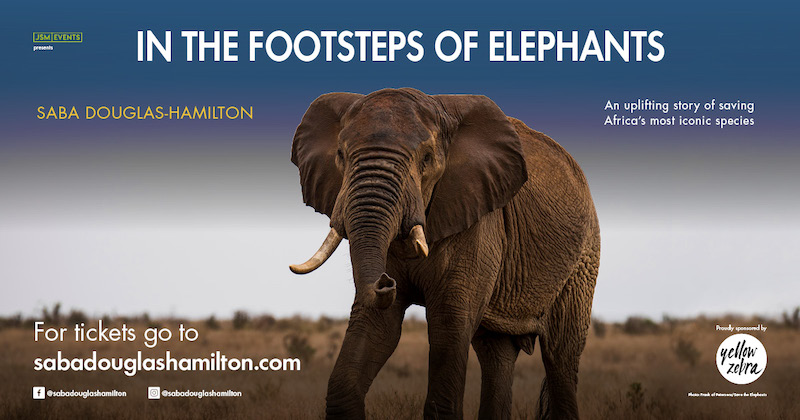 Get your tickets by clicking here

Born and raised amongst nomads and wildlife in the savannahs of East Africa – conservationist and filmmaker, Saba Douglas-Hamilton has lived and breathed the battle to save Africa’s elephants from day one, hand-in-hand with her family.

Their vehicle, a small but hard-hitting NGO, Save The Elephants – founded by her father, Iain Douglas-Hamilton, a pioneer researcher of elephant behaviour – harnesses the minds and fighting spirits of dedicated scientists and local Samburu people defending elephants from ivory trade and conflict.

‘In The Footsteps of Elephants’ is an inspiring and heart-warming account of the tumultuous journey and impossible odds faced by a brave alliance saving Africa’s most iconic species.

Triggered by pivotal support from Leonardo DiCaprio, Save The Elephants success in raising millions of dollars with their partners, fighting wildlife traffickers, luring super models to the wilds of Kenya to influence opinion in China, and persuading high-end jewellers like Tiffany’s to commit to the cause, has helped turn the tide and won back critical space for this endangered species.

Saba’s stories of cattle rustlers driven mad by accelerating desertification, the trust of sleeping elephants forced to seek shelter among humans, China’s greatest athlete kick-starting change, and the courage of Africa’s unsung heroes risking their lives fighting poachers, swings from heart-breaking to hilarious in a spirited rebellion against the culture of rogue materialism that is bankrupting our planet.

This promises to be an evening of love and loss, happiness and heartache, beautifully illustrated with photographs and film, and told in gripping detail by an arch-storyteller celebrating the synergy and triumph of a committed coalition.

With the world waking up to the climate crisis, Saba explores how our planet’s biosphere has never been more important or more fragile.

But in this uplifting and inspiring story, she shows that there is still hope for the African elephant – and for all species – if we continue to work together as a force for change.

Saba’s new show ‘In the Footsteps of Elephants’ will be coming to Eden Court in Inverness on the 13th October.