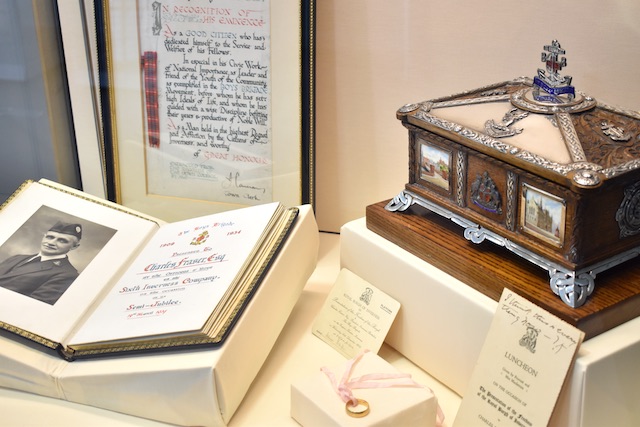 Inverness Museum & Art Gallery has opened a temporary display exploring the Freedom of the Royal Burgh of Inverness, a rare civic honour awarded in recognition of exceptional service to society and to the city itself.

The display, which features artefacts relating to several recipients of the Freedom, will run until 28 August 2021.

It is located on the 1st floor foyer of Inverness Museum & Art Gallery, which is open from 10am to 5pm, Tuesday to Saturday.

“For centuries, the Freedom of Inverness has been a celebration of outstanding citizenship and commitment to the community.

“Our display takes a look at the significance of this status and the elaborate rituals performed at official Freedom presentations.”

Highlights of the display include an ornate silver and oak Freedom casket presented to Inverness businessman Charles Fraser Esq. in 1938, an 18th century Burgess Ticket, and an illuminated scroll commemorating the 2002 Freedom presentation of the late former Provost Allan G. Sellar OBE.

Objects owned by Fraser and Sellar were donated to the museum recently and are being displayed for the first time.

Inverness Town House is also supporting the museum by loaning its Burgess Rolls, a pair of decorative parchments which have been signed by all recipients of the Freedom since 1893.

The most recent signature belongs to former P.E. teacher Colin Baillie, who was awarded the Freedom in 2018.

The Freedom of Inverness traces its origins back to the medieval period, when it functioned as a grant of economic and political privileges.

Although the power of these privileges declined over time, the Freedom itself remained an important mark of social status. The Freedom was first awarded as a purely ceremonial honour in 1811 and has since been granted to at least 59 individuals and organisations.