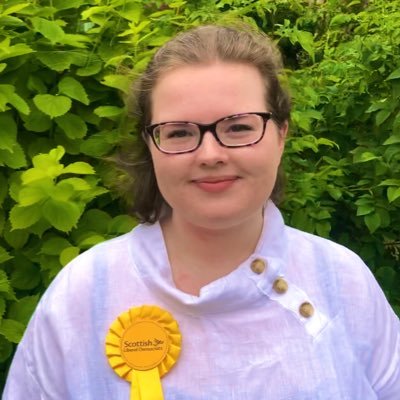 The Highland Liberal Democrats have announced their candidate to win back Caithness, Sutherland, and Ross at the Scottish Parliament elections in May next year.

The Party has confirmed Molly Nolan (pictured), who lives locally in Evanton, is seeking to emulate the success of Jamie Stone MP who was re-elected to represent the area in Westminster last year.

Announcing her candidacy, Molly said she is “determined to listen to as many people as possible” and will campaign to “protect jobs, safeguard our environment and ensure every young person across the Highlands has the opportunity to get on in life.”

Molly was a pupil at Dingwall Academy and Plockton Music School before heading to Harvard University, where she graduated in 2019.

Now back home in the Highlands, Molly works in communications and advocacy.

Local Liberal Democrat MP Jamie Stone described Molly as a “shining example of the next generation of Highlanders” while Scottish Liberal Democrat Leader Willie Rennie said she offered the opportunity to “do things better” and made clear that “only a vote for Molly can stop the SNP here.”

The Scottish Parliamentary seat in the Far North was held by the Liberal Democrats between 1999 and 2011.

The Scottish Liberal Democrats have declared the seat as their number one target at the elections next year, having won the corresponding Westminster seat in 2017 and 2019.

“With the coronavirus crisis leaving so many Highland residents facing financial hardship, it is more important than ever to address the inequalities in our communities.

“We must ensure no one is left behind.

“I know that challenges in the Highlands have never been more acute, from the fragility of our tourism industry to increased cuts in local services.

“These issues are not being addressed by the SNP Government, which for the past 13 years has prioritised the centralisation of powers in Edinburgh over dealing with everyday concerns.

“I am determined to listen to as many people as possible and stand up for what matters.

“Liberal Democrats will protect jobs and services, safeguard our natural environment and ensure every young person across the Highlands has the opportunity to get on in life.”

“I am so impressed with Molly’s passion for the Highlands and her grasp of the issues that matter most to local people.

“It is easy to see that she was inspired by my friend, the late Charles Kennedy.

“She is a shining example of the next generation of Highlanders – just as much at home performing at Fèisean as she is dealing with major businesses and institutions across the world.

“As soon as it is safe to do so, I can’t wait to go and knock on doors and get campaigning with her.

“People will take to her in no time.”

“Molly has got a great chance of winning back Caithness, Sutherland and Ross.

“With our party’s deep roots in the Highlands and Molly’s fresh enthusiasm and energy, we are offering people the opportunity to do things better.

“With the contest neck and neck between the Liberal Democrats and the SNP, only a vote for Molly can stop the SNP here and reject another divisive independence referendum.

“Caithness, Sutherland and Ross is our number one target seat and we are determined to win it back.”