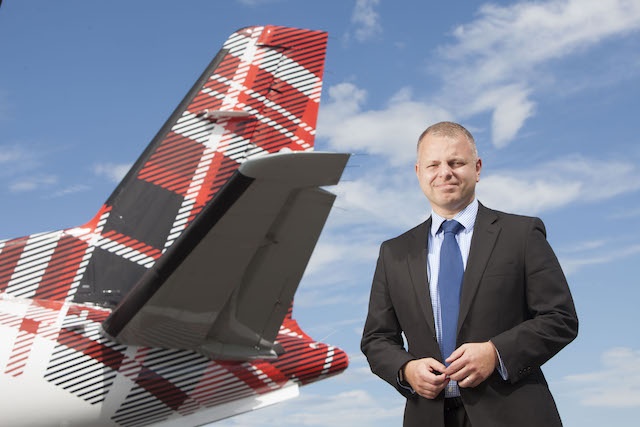 Loganair, Scotland’s Airline, has issued an update of its trading performance as the company files its audited accounts for the year to 31 March 2020 at Companies House.

In that year, Loganair has reported a loss before tax of £12.7 million of which nearly £3m was attributable to the onset of the COVID-19 pandemic in the final month and the associated re-valuation of fuel and currency contracts as required under accounting standards.

The reported loss also reflects the progress on Loganair’s fleet renewal programme during the year – leading to a charge of £7.5 million associated with the retirement of older aircraft – and a loss of £2.1 million arising from the industrial dispute by air traffic controllers at HIAL airports which ran through most of the year.

The airline’s turnover grew from £120 million to £169 million during the year as it phased out its older Saab 2000 and Dornier 328 turboprops and introduced next-generation ATR turboprop aircraft to its fleet.

It now has seven of the aircraft in service, delivering lower environmental emissions, improved capacity and better operating economics throughout its route network.

Loganair is now the UK’s largest regional airline, with over 70 domestic routes plus services into Ireland, Norway and Denmark.

The impact of the pandemic on the aviation sector as a whole has been very significant, and Loganair is by no means exempt from these challenges.

However, for the financial year now drawing to a close, Loganair expects to report a significantly narrowed loss thanks to new income from contract and charter flying and a rigorous focus on costs, including the use of the CJRS “furlough” scheme to support its employees during the downturn in demand.

The airline stepped in following the failure of Flybe in March 2020 to maintain the Isle of Man’s lifeline air services; has converted aircraft to fly COVID-19 patients for the Scottish Ambulance Service; has maintained regular passenger and mail services throughout the Highlands and Islands, and has continuously flown scheduled and charter services at Aberdeen to support essential travel in the oil and gas industry.

“The last 12 months have placed an extraordinary burden on everyone, yet we are incredibly proud of the efforts which Loganair’s team has made to continue delivering for the communities that we serve,” said Chief Executive Jonathan Hinkles.

“In addition to our long-standing duties and responsibilities in the Highlands and Islands, we’ve also added new contracts in the oil and gas industry, and stepped in to safeguard 16 routes following the collapse of Flybe.

“We’ve flown record volumes of mail and cargo through our route network as well, highlighting the increased capacity of our new ATR72 freighter aircraft.”

To ensure that its financial foundations are secure for the future, Loganair was an early adopter of the UK Government’s Coronavirus Large Business Interruption Loan Scheme (CLBILS) in July 2020.

The airline agreed a £25 million loan facility with Clydesdale Bank and owners Stephen and Peter Bond simultaneously agreed a package of support amounting to £11 million over two years.

Despite the unexpected longevity of the pandemic, Loganair continues today to trade in line with the cautious forecasts drawn up at the time of the refinancing.

“This comprehensive re-financing enables Loganair to look to the future with confidence,” says Jonathan Hinkles.

“As the UK’s vaccine programme continues apace, we are already seeing modest signs of a recovery in bookings on domestic routes for the year ahead.

“Although we have a long way ahead of us on the path to recovery, the support of our team, our shareholders and our lenders is truly appreciated and integral to our future success.”

Loganair will resume services on several routes during April, with others following through May and June.

These will include the re-launch of services on several former Flybe routes linking Scotland and the north of England with Southampton, Exeter and Newquay.