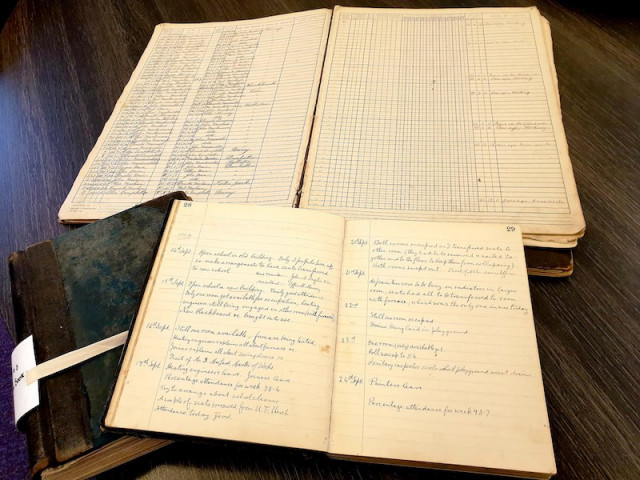 Found within the vaults of the education office in Ardross Street, Inverness, the records, which go through to 1980, have been handed to the Skye and Lochalsh Archive Centre.

“The recent additions to the collections include Portnalong School, North Talisker and Knockbrek Primary, Waternish.

“In 1919 the Land Settlement (Scotland) Act was passed designed to provide smallholdings fit for heroes returning home from the first world war.

“The Board of Agriculture for Scotland purchased 60,000 acres of land in North Talisker from Norman MacLeod of MacLeod, having previously been a sheep farm following clearance in the 19th Century.”

In 1923 approval was given for 68 new holdings at North Talisker forming townships at Fiskavaig, Portnalong and Fernilea.

These areas were largely populated by families from Harris and Lewis as a reaction to overcrowding in the Outer Hebrides.

“The influx of families to North Talisker meant that a new school was required for the area, as the closest school at Carbost was too far away.

“Due to pressure from parents on the local education authority, a school was opened in 1924 based in a hut on the pier, accommodating 56 pupils.”

Teacher at Portnalong School James Campbell wrote to the Director of Education Murdo Morrison in May 1924, saying:

“I opened this school yesterday, the 19th. I had 19 pupils present.

“Today I had 26 pupils, but this is not all that are to come.

“I got a man to collect the names of all the children within school age, and the list I received show that there are 44 children.

The new records show that Knockbreck school had a regular attendance of 60 pupils by 1877.

“Throughout the 1920s a side school was provided in a thatched house in Trumpan, but by 1924 it was deemed unfit for purpose and was forced to close in 1925 before the roof fell in.

“The public health authority was also concerned that cattle were polluting the school water supply at Knockbreck in 1930 and brough the matter to the School Management committee.

“During 1932-33 the HM Inspector was impressed that the junior children were equally fluent in both English and Gaelic.”

“What a fascinating find, which I am delighted will now be conserved in Skye and Lochalsh Archive Centre for public viewing.

“It’s interesting to see that the pressures on school accommodation and demand for new schools were being experience by our predecessors just as they are today.”

Knockbrek School is still open with a roll of seven primary pupils.