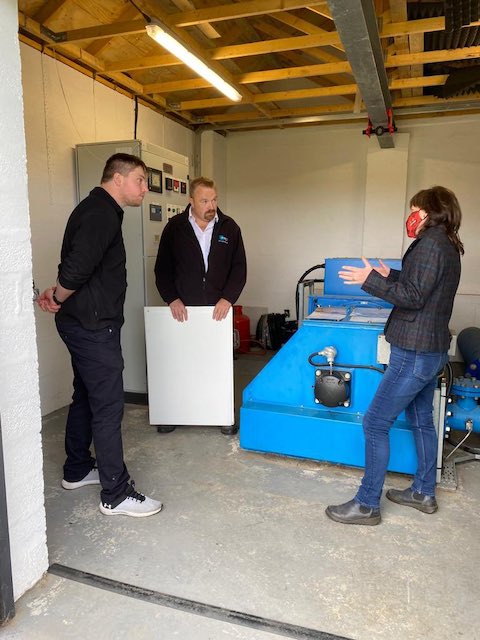 MSP for Caithness, Sutherland & Ross, Maree Todd has visited a local farm ahead of COP26, to find out what the agriculture sector is doing to address the climate emergency.

The ‘Pre-conference Fact Finding Farm Visit’ was run jointly by NFU Scotland, Quality Meat Scotland and SAC Consulting and provided elected representatives the opportunity to meet local farmers and see first-hand what action is been taken to tackle climate change in their areas.

Auchmore farm was one of nine Climate Change Focus Farms under the Scottish Government funded Farming for a Better Climate initiative between 2014 and 2018.

The farm has made many changes to its practices to reduce its carbon footprint, including becoming a Class 2 Wind Site with two 500kW wind turbines, changing the way they manage their livestock, enhancing soil health and nutrient use, introducing solar power and a hydro scheme.

“It was fantastic to be invited along to meet the Mackenzie family at Auchmore Farm on Friday [24 September] and hear all about the new practices that have been implemented on the farm to tackle climate change, from changes in livestock management to carbon offsets from renewable energy.

“COP26 is a real opportunity to accelerate climate action across the globe so it’s been great to learn -ahead of such a historic event – what efforts are being made locally within the agriculture sector to reduce Scotland’s contribution to the climate crisis.

“Many thanks to NFU Scotland for organising and to the Mackenzie family for hosting such an inspiring event.”