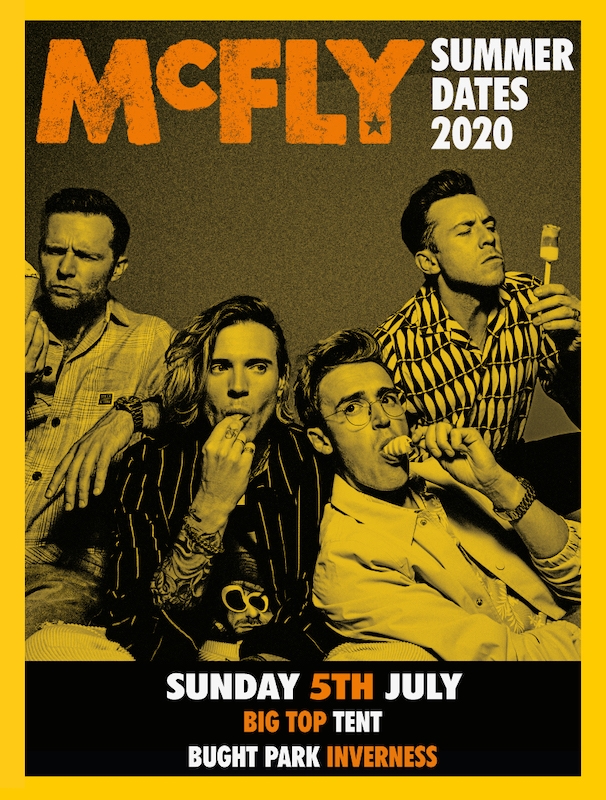 McFly have announced they’re coming to Inverness for a one-off summer show.

The announcement comes ahead of McFly’s comeback show at London’s O2 later this month, which sold out in just minutes.

In April 2020, the band is back on the road touring, and come July they will be performing in Inverness.

With seven UK number-one singles, five top-ten albums, six sell-out tours and ten million records sold worldwide, McFly are without question one of the most significant British pop acts of the twenty-first century.

Since hitting the big time as the youngest band ever to have a debut album go straight to number one — beating The Beatles’ long-standing record — Tom, Danny, Dougie and Harry have become one of our best-loved bands, not to mention major stars in their own right.

They will play their best-loved mega-hits such as All About You, Obviously, Star Girl, One for the Radio and Shine a Light.

They will perform the cream of The Lost Songs, originally intended for Album 6, and showcase their amazing musicianship, showmanship and humour.

And, knowing the guys, there might well be a surprise or two along the way…

LCC Live, the biggest producer of live music events in Inverness and the North of Scotland, is bringing McFly to Inverness, as part as its Live in the City series of music events. Director, Claire Kidger, commented:

“This is another coup for us, confirming McFly, one of the greatest bands of their generation, to perform in the Highlands.

“The show will be in the Big Top Tent at Bught Park, which proved a popular venue last year, and means everyone can enjoy the show, no matter the weather!

“Come along and join us and give McFly the welcome they deserve.”

Tickets for McFly in the Big Top Tent in Inverness go on sale on Friday (15th November 2019) at 9am and are available to purchase from Ticketline (www.ticketline.co.uk; 0844 888 9991) or from Cafferys, Eastgate Shopping Centre, Inverness, IV2 3PP.