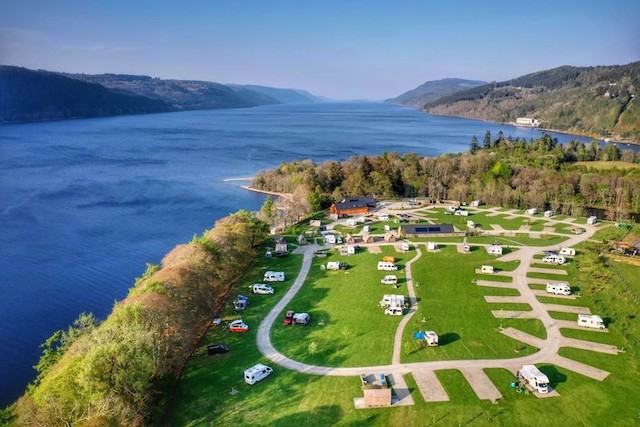 A caravan and camping site on the shores of the world-renowned Loch Ness – the Scottish freshwater loch with its own legendary monster – is on sale for offers of over £2 million.

Visit Scotland 5* rated Loch Ness Shores is set immediately adjacent to the waters on the east side of the loch.

It is one of only three locations with direct access to the loch.

It is presently a Camping & Caravanning Club (‘CCC’) franchise site, but is up for sale for the first time because the franchise is coming to an end and the owner is retiring.

“The location is one of the world’s most renowned tourist destinations and the popularity of the area, including those coming to spot “Nessy”, shows no sign of abating.

“The Loch Ness Shores site has been thoughtfully developed by the vendors from scratch, and now offers a purchaser a once-in-a-lifetime opportunity to benefit from the growing demand and sustained popularity of the UK touring, glamping, and short stay markets.

“The purchaser can either apply to become a Franchisee of the CCC network or operate as a separate entity.”

The park has around 300m of loch frontage, its own private slipway, salmon fishing permits, and a site licence for 124 tourers, tents, or motorhomes for 12-month use.

It is currently developed with 99 touring caravan pitches of which 56 are hard standing (including 10 “super” pitches connected to sewerage and water) and eight wigwam cabins used for glamping holidays.

In addition, there is an area which accommodates up to 21 tents plus space for more than 20 overspill pitches.

Other features include a high-quality amenity block, a new bistro and a stunning one-bedroom owner’s apartment with a gable window providing spectacular views over Loch Ness.

There is also opportunity to grow the site further with a 4.5-acre loch-side paddock which could be developed with holiday lodges, subject to planning permission.

Community to Buy Land in Scourie for Affordable Housing