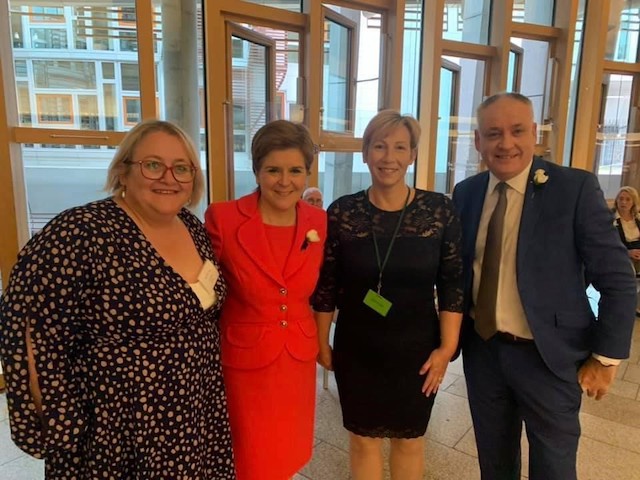 Richard Lochhead MSP for Moray attended the state opening of the Scottish Parliament on Saturday [2nd October] and was joined by local hero, Debi Weir.

Mr Lochhead invited people to nominate a local hero to represent Moray at the official opening. Debi Weir, who set up Moray’s School Bank, was chosen for her efforts during the pandemic and down the years to mitigate poverty in Moray and the work she’s done to support families who are struggling financially.

“The official opening of Parliament by the Queen is usually held during the summer months but was delayed this year due to the pandemic and after the challenges we’ve all faced over the last 18 months, it was great to see people from across Scotland back in our national Parliament.

“I was delighted to welcome Debi to Parliament as my local hero and to have her represent Moray.

“She is a committed and dedicated volunteer who has supported many local families over the years through her work on the Moray School Bank.

“Debi’s a determined campaigner who works hard and has clearly made a difference to many people’s lives – she truly represents the best of Moray and the hundreds of volunteers in our local communities who have gone out of their way to help others during the pandemic.

“Debi took her colleague Debbie along as her guest in recognition of the vital role she plays at the Moray School Bank – I know she also does a power of work to make the school bank a success and so it was great that she was able to be part of the day.

“The opening ceremony was incredibly reflective this year with speeches and performances all poignantly reflecting on the pandemic and what we’ve gone through over the last year and a half, as well as looking ahead to some of the huge challenges facing our country and our planet.

“Given the challenges we’ve faced in the last 18 months, it was right that the local heroes and our young people are the heart of the celebrations.

“Our national parliament has some huge issues to grapple with over the next five years and it is important that we do that by working together and taking the people of Scotland with us.

“It is real privilege to be a part of that and it continues to be the biggest honour to represent the people of Moray in Parliament.”

“I was delighted to be chosen and had a wonderful day at the Scottish Parliament, it was an honour to witness the opening ceremony.

“I was just delighted to find out that I would get to meet the Queen and chat to her about our work.

“It really was a wonderful experience that I will never forget.

“Being in a room with so many inspirational people who have supported their community during the pandemic really was just amazing.”