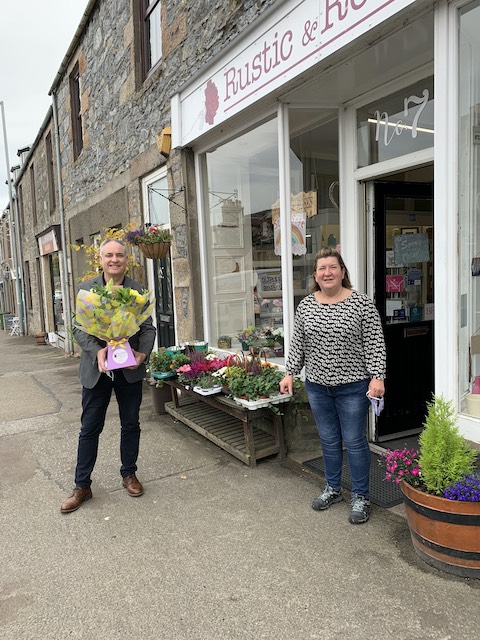 Moray MSP Richard Lochhead has highlighted the risk to independent florists of a no-deal Brexit after meeting Morag Ross who owns the ‘Rustic & Roses’ floral studio in Dufftown.

In the event of a no-deal Brexit the level of Tariffs is likely to sit around 8 percent plus additional transportation and administration costs to cover additional documentation and inspection arrangements.

There is also a concern that additional time needed for border checks will have an impact on the shelf life of flowers, which are fresh produce.

“It is clear that a no-deal Brexit has a wide range of significant negative consequences.

“In the case of independent florists there is little alternative to importation from the EU, as UK based flower producers produce only 10 percent of the flowers sold in the UK and 90 percent of that goes direct to supermarkets.

“Independent florists will bear the brunt of any additional border controls as it is very difficult for them to source UK produced flowers and with florists in pretty much every town that has the potential for job losses and business closures if customers are either unable or unwilling to pay the additional costs.

“There are extra challenges facing florists in rural villages like Dufftown, given the distances involved and additional delivery charges.

“I have written to the UK Government highlighting this as a further example of the impact that a no deal Brexit would have.

“In the meantime, we have the deeply concerning situation of the UK Government proposing to renege on a previously agreed treaty, which would make trade deals even more difficult to pin down as international trust with the UK as a partner is broken.

“The impact on independent florists like Morag is just one example of many in Moray where frictionless trade with the EU has been a huge benefit and where the risk of losing that is causing enormous concern.

“The Prime Minister’s brinkmanship with the EU has to stop and he has to consider the impact on jobs here in Moray, across Scotland and throughout the UK.

“This is of critical importance and is now just over a hundred days away from reality if the UK Government stays on its present course.”