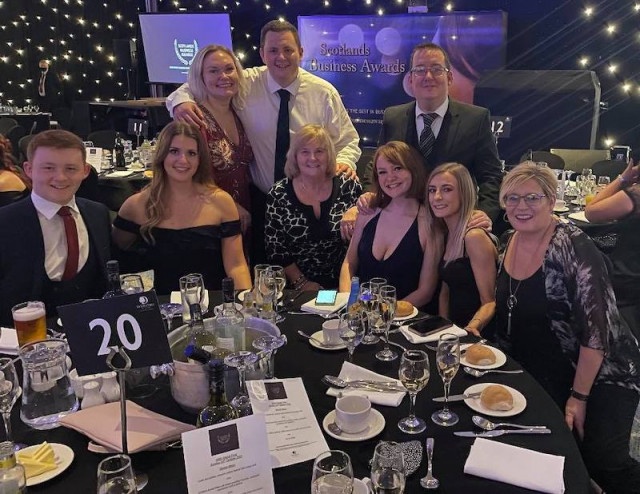 Pictured: The Sun Dancer team at the awards ceremony, Lee Jack owner of the restaurant is back right.

A Highland Restaurant has been crowned the Best Restaurant in Scotland 2020 at a prestigious awards ceremony.

The Sun Dancer restaurant in Nairn scooped the accolade at Scotland’s Business Awards which were held on Sunday evening at the Double Tree by Hilton Hotel in Glasgow.

The restaurant which specialises in seafood has already been recognised for its creative dishes and stunning location with three previous awards including being given the title of Scotland’s Hidden Gem in the Scotsman Food & Drink Awards in 2018.

Lee Jack, owner of the restaurant which opened in 2016 said he was delighted with the award:

“This really is tremendous and is purely down to the hard work of the whole Sun Dancer team.

“From our suppliers to the chefs and kitchen team to the front of house staff and those that keep us ticking over on the admin side of things, we really are one huge team and it’s because we all work together that we have secured this award.

“Clearly the last two years have been tough for everyone in hospitality but our team rose to the challenges and still are.

“It is testament to them that they were still able and willing to provide a top-class service to our customers despite the restrictions and rules that we faced and still are having to deal with.

“There are tough months ahead, but this award, along with our loyal customers and many new faces that we get to meet on a daily basis is going to ensure that we keep striving hard to continue to be the best, not just for ourselves as a restaurant, but for Nairn, the fantastic town where we are based as well.

“In some ways, having gone through the last two years makes this award all the more meaningful.”

The Sun Dancer which offers panoramic views over the Moray Firth opened in August 2017 on the site of a former games arcade and ice cream shop.

The development of the modern building has helped to transform the area and the restaurant which also comprises and take away and café is now popular with locals and tourists alike.

In February 2018 it was awarded Best Seafront Restaurant– Highlands and Islands in the Lux Life Food & Drink Awards and the following year it was crowned Restaurant of the Year the Inverness Business Awards.

It was also listed in Scotland The Best by Peter Irvine which is known as being the true Scot’s insider’s guide to the very best Scotland has to offer.

Nutritionist Reveals Seasonal Superfoods to Save Money This Month