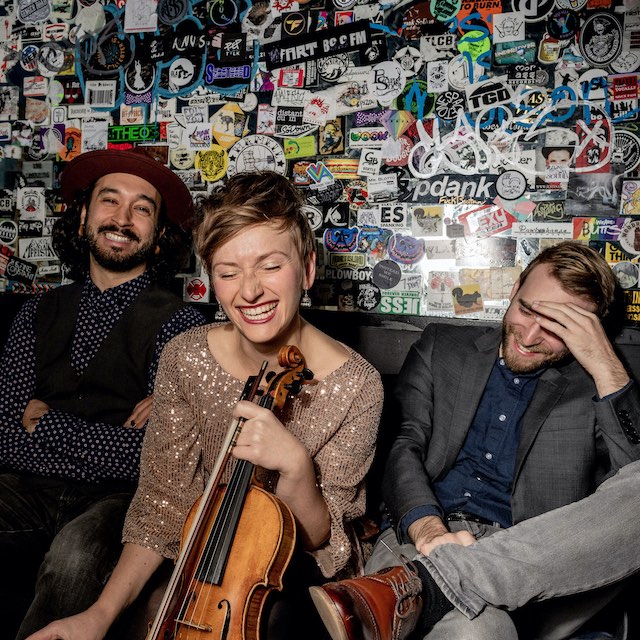 Now More Than Ever is the much-anticipated second album from the Katie McNally Trio (pictured).

Set for release on Friday 4th December 2020, Now More Than Ever is the follow-up to the Katie McNally Trio’s debut album The Boston States, released in 2016.

Showcasing a mature and self-confident trio, who have truly grown into their sound, Now More Than Ever is a body of work that is both ambitious and self-assured.

The trio, comprising of Katie McNally, Neil Pearlman and Shauncey Ali, have created an album that explores the possibilities that present themselves when three Americans embark on a career playing Scottish and Cape Breton music.

Now More Than Ever is packed to the brim with tunes rooted in these respective music scenes, as well as self-penned tracks that are influenced by the triad’s own take on the traditions.

Defying any robust genre categorisation, the Katie McNally Trio continue to examine Scottish traditional music through an American lens whilst simultaneously introducing styles typically associated with the States, such as bluegrass and Latin jazz.

This new album focuses solely on the three artists in the trio’s line-up and with no guest appearances, every band member is able to expand their musical role and completely fill out the sound with their own distinct voices.

“Now More Than Ever is very much a story of where we all come from and yet how far we’ve come.

“With our debut album, we were actively working towards reaching for something new whilst still holding on to the traditions of something old, and at the same time trying to establish our sound as a band.

“I feel we managed that with The Boston States, however now more than ever, we feel like we’re significantly more content with our own sound and we want to explore that primarily.

“With this album, we have grown in confidence to fully be ourselves, musically speaking.

“The title of the album also reflects a communal feeling among us that this year we need to continue to collaborate with each other, make music and embark on projects that nourish us.

“As a band, and as members of the wider cultural community, we need to share our music and cultivate our artform in as many ways as possible during these difficult times.”

Now More Than Ever is produced by Scotland’s Anna Massie (of Blazin’ Fiddles fame) at Grans House Studio (run by Angus Lyon in Biggar, Scotland.)

Now More Than Ever will be released on 4th December 2020.

It will be available to download, stream and on CD.