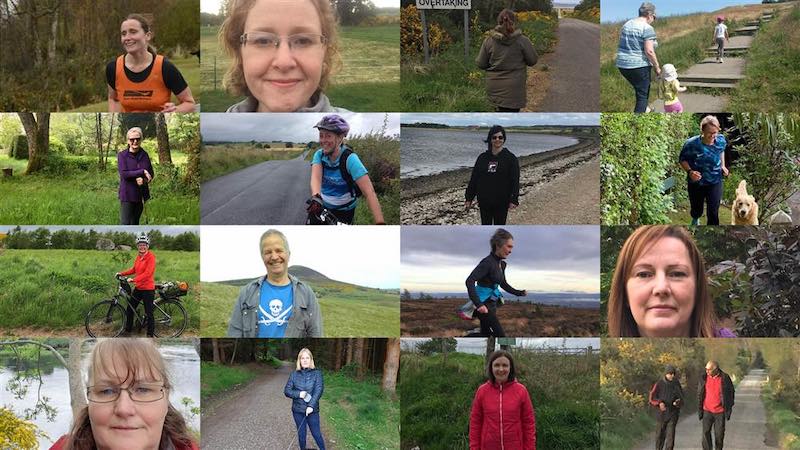 As part of efforts to keep fit and fundraise for their community, 16 staff members from NHS Highland are travelling the equivalent of Land’s End to John O’Groats by running, walking or cycling for charity.

The staff who work across a number of roles in rehabilitation and neurology have been adding up the cumulative miles they have exercised as part of a fundraising initiative with all donations going to the Highland Hospice.

“At the start of the pandemic we became aware of how easy it was not to take the normal amount of exercise and keep fit.

“We set ourselves some targets and motivated each other to go out more.

“We also became aware of the difficulty many charities are experiencing at this time with fundraising and the cancellation of big events such as local festivals.

“We therefore combined the two and are aiming to raise money for the Highland Hospice.

“We already had a close working relationship with the Hospice and greatly value the work of the palliative care service.”

Everyone on the team has embraced the idea of improving fitness to such an extent that within two weeks they had travelled from Land’s End to the Highlands and are just a few short miles away from their target of John O’Groats.

They have also exceeded their target of £1200 on their Just Giving page.

“There is lots of motivation in the team and everyone has a personal target.

“It has been a fantastic way of team building and improving wellbeing and we are already noticing an improved fitness level.

“It’s been really enjoyable and I hope it is something we will all continue to do.”

The team is exceeding its fitness goal and would love to exceed its fundraising target for Highland Hospice.

If you’d like to show your support for the group by donating to their page you can do so at the following link.