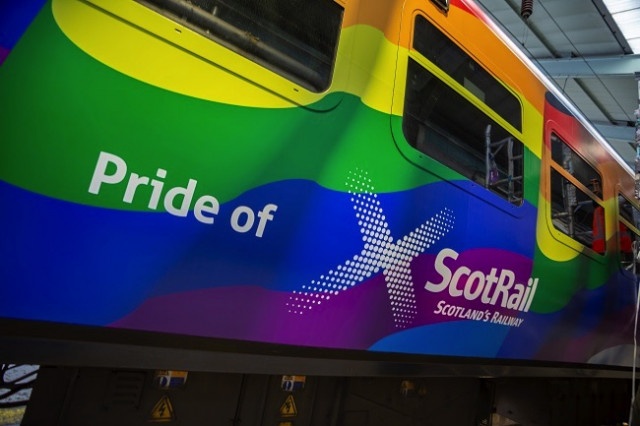 ScotRail is proud to unveil its Pride of ScotRail Train.

The Class 334 electric train features the eye-catching new Progress flag instead of the traditional Rainbow design.

The newer graphics include additional stripes and colours to represent more of the LGBTQ+ community.

The train operator is fully supportive of Pride Month and the Pride of ScotRail Train will operate right across Scotland on our busiest routes, serving destinations from Helensburgh, Motherwell and Milngavie, to Bathgate, Livingston and Edinburgh.

And, although the Pride of ScotRail Train is being launched to coincide with Pride Month, the vinyl stickers will remain in place until 2029 when the metalwork will require repainting.

ScotRail has a dedicated Diversity & Inclusion manager as well as an employee network for LGBTQ+ people and allies. It’s called Pride of ScotRail, from which the train takes its name.

“Scotland’s Railway is for everyone and, this Pride Month, we wanted to do something really special to demonstrate our support for Scotland’s LGBTQ+ community.

“That’s why we are unveiling our “Pride of ScotRail” train, created by our own staff LGBTQ+ and allies network and designed by one of our talented team.

“It’s a visual commitment to our support and a reminder that we won’t tolerate bigotry or discrimination.

“Regardless of background or your identity, you should feel welcomed and safe when travelling.

“And it goes way beyond the month of June.

“This design will stay on the train for the next eight years, until it eventually requires repainting.”