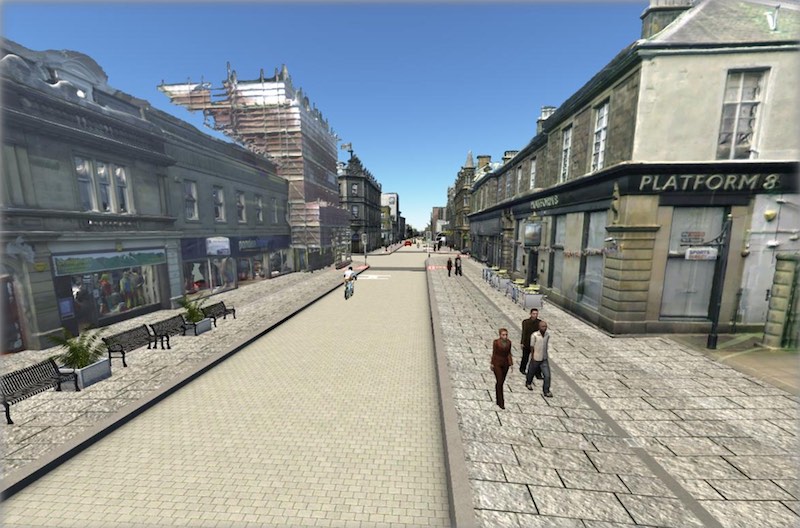 The Highland Council is encouraging members of the public to participate in events in August and September designed to get feedback about the proposed designs for a cycle route through the town centre.

The project is an extension of the proposed Academy Street improvements for people walking and wheeling.

The first event, which is already full, takes place at Velocity Café & Bicycle Workshop in Inverness on 31st August at 6pm.

Here, feedback will be sought on two proposed cycle routes in the city centre, designed to facilitate cycling across the city by connecting Millburn Road to the existing cycle routes on Ness Walk and Huntly Street.

The first route being put forward would utilise the Eastgate Underpass to connect to the existing cycle route on the High Street before ultimately connecting to Bridge Street.

The second route would access Falcon Square and Inglis Street.

In both scenarios, the plan would be to reconfigure Bridge Street to accommodate a cycle connection by reducing the width of the carriageway.

The second event is an online event scheduled to take place on 1st September at 7pm. Representatives from The Highland Council and Active Travel teams will be present at both events.

Details of both events as well as the visuals of showcasing the proposed designs for Academy Street can be found at https://academystreetproposals.commonplace.is/ where there is also an opportunity to give direct feedback.

These events are the most recent in a series of events held over the summer with businesses and specific interest groups.

The designs will also be available to view at key areas in the city centre including the bus station, train station, Eastgate Shopping Centre and Victorian Market.

The Highland Council has secured funding through ‘Places for Everyone’ for the design of Academy Street, with the aim of making it a more attractive and healthier place for people to walk, wheel, and cycle.

‘Places for Everyone’ is a scheme funded by the Scottish Government through Transport Scotland and is administered by Sustrans.

To ensure equal provision for all street users, the funding is contingent on identifying a viable alternative cycle path to Academy Street which enables cyclists to safely cross the city.

Speaking about the future of Academy Street, Councillor Ian Brown, Leader of Inverness and Area, said:

“Over the summer, many people have taken the opportunity to consider the proposal for Academy Street and we hope that that these next two events, which conclude the first phase of this consultation, will also be well attended.

“Over the years, Academy Street has been the focus of much debate.

“It is the gateway to the city, and we have the opportunity to improve the quality of the space, making it a more attractive and healthier place for everyone that uses it.”

The central focus of the design for Academy Street is to widen the pavement and increase space for pedestrians, something that was trialled during the COVID-19 pandemic when temporary measures were introduced to Academy Street as part of the ‘Spaces for People’ project.

Funded by the Scottish Government, this was a Highland-wide initiative that not only provided physical distancing but also improved the opportunity to support people to travel by healthier, low carbon transport such as walking, wheeling and cycling.

Emily Gait, Grant Manager for Places for Everyone at Sustrans, said:

“These events present key opportunities to hear first-hand from key communities about how walking, wheeling and cycling in Inverness city centre can be made more accessible. We are looking forward to hearing the views of Inverness residents on these exciting proposals.”

All views with be collated and reviewed and will inform the ultimate design of Academy Street.