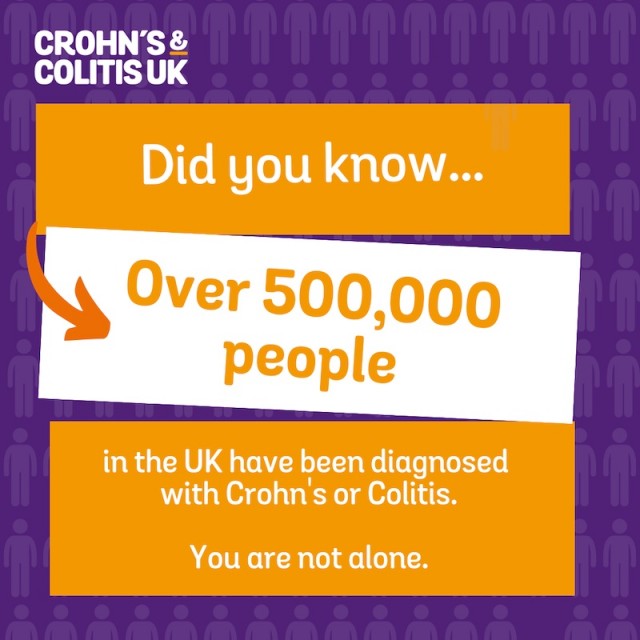 New research released by Crohn’s & Colitis UK today shows that the number of people in the UK living with Inflammatory Bowel Disease (IBD) – the two main forms of which are Crohn’s Disease and Ulcerative Colitis – has been vastly underestimated for years and the rates are growing.

Crohn’s Disease and Ulcerative Colitis are both serious, life-long conditions that involve inflammation of the gut.

They can cause debilitating pain and can have a huge impact on people’s mental wellbeing due to the impact of their symptoms.

Patients can also be at higher risk of bowel cancer and up to 80% of people with Crohn’s Disease and 15% of those with Ulcerative Colitis will need to have surgery at some point in their lives.

There is no known cure for either condition.

The research, which was carried out by scientists at the University of Nottingham and funded by Crohn’s & Colitis UK and Coeliac UK, shows that the prevalence of Crohn’s and Colitis in the UK population is far higher than previously thought.

The study shows there are over half a million people (1 in every 123) in the country living with inflammatory bowel disease, nearly double that of the 300,000 previously estimated, raising concerns about the capacity of the health service to provide the required care for thousands of people.

The research is the largest of its kind worldwide and measured the incidence (the diagnosis of new cases) and prevalence (the number of cases in the population in 2020) of Crohn’s and Colitis over the last 20 years.

It gives the best picture so far of the scale of the problem across the country.

The study involved researchers analysing the health care records of 38.3 million people registered with GPs as part of a UK-wide study.

It found that 0.81% of the population or one in every 123 people are living with Crohn’s or Colitis, increasing to 1 in every 67 for people in their 70s.

Globally, this research puts the UK as second only to the US in terms of percentage of the population living with the condition and the problem is set to grow.

Symptoms of Crohn’s and Colitis include urgent and frequent diarrhoea (often with blood), abdominal pain, fatigue, and associated anxiety and depression.

The causes of the conditions are unknown and some patients wait years to receive a diagnosis, meaning their symptoms could worsen and they potentially miss out on important treatment and care.

People receiving treatment for Crohn’s or Colitis need specialist care and support from nurse specialists, dietitians and psychologists to help them manage the impact of their condition.

Currently, and in part due to the underestimated prevalence, the health service is not equipped to manage this care adequately in any of the four nations.

“This study shows that there are nearly twice as many people living with Crohn’s Disease and Ulcerative Colitis in the UK than previously thought, yet outdated figures mean the scale of the issue has been overlooked for too long.

“Lifetime costs for the NHS for treating these conditions are comparable to heart disease and cancer.

“They can have a profound impact on a person’s life and patients need expert care from doctors, specialist nurses, dietitians, pharmacists and psychologists.

“It’s crucial that the NHS recognises the scale of the growing numbers with Crohn’s and Colitis and does more to prevent lives being blighted for decades by these debilitating illnesses.”

“I had symptoms for over 3 years before I received my diagnosis.

“I was suffering pain, weight loss, sickness, and had been admitted to hospital several times.

“Yet doctors told me that it was psychosomatic and I wasn’t believed.

“I’ve now been living with Crohn’s for over 40 years, having tried years of different medications and had two bowel resections.

“It’s something you learn to live with, but even on good days I have near constant fatigue, frequent pain, and always have to think about where the nearest toilet is.

“The impact it has on your life is huge.”

Dr Laila Tata, Associate Professor of Epidemiology at the University of Nottingham and lead researcher said:

“IBD is unlikely to have reached its peak in the UK.

“This research estimates that the number of people living with the condition has grown to approximately half a million.

“It is a lifelong condition so it’s highly likely that the prevalence will continue to increase as the population ages.

“The associated complications, burden on individuals, capabilities of the healthcare system and other societal impacts of this all require serious consideration.”

The research found that the prevalence of Crohn’s Disease and Ulcerative Colitis was lower in London compared to the rest of the UK and highest in Scotland.

This could be due to a younger, urban population in London.

The prevalence was also lower in more socioeconomically deprived areas and higher in people who declared their ethnicity as white compared with all other ethnicity groups.

“We need continued research to understand why we’re seeing inequalities in diagnosis.”

Dr Christian Selinger, Chair of the IBD Committee at the British Society of Gastroenterology, said:

“We have seen our workload in IBD increase over the years.

“The service is under strain as we have more patients and not enough staff.

“In terms of going forwards, we need to make a clear plea for investment in IBD services and the NHS, in order to deliver a high quality of care to patients and provide a better service.”