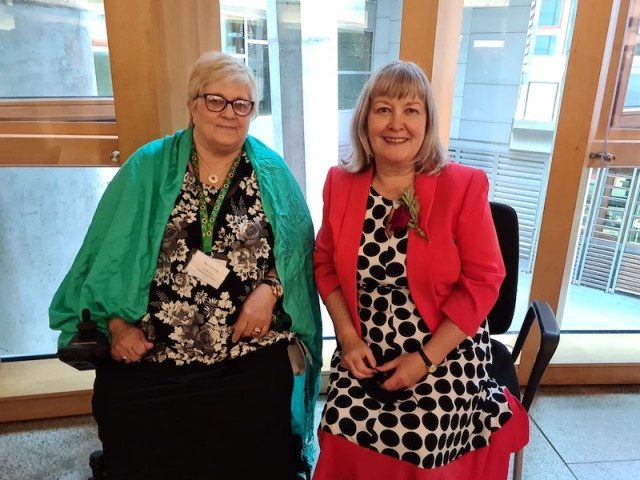 The Regional MSP nominated Mrs Ramsay, who lives in Dalneigh, Inverness, earlier in August ahead of the sixth Parliamentary session being formally opened by Her Majesty The Queen.

Mrs Ramsay, Chair of the Scottish Tremor Society, has lived with Essential Tremor her entire life however, it was not diagnosed until she was 48 years old.

Since 2016, she has helped Dundee University, in conjunction with Ninewells Hospital, with a fundraising drive to raise £2.3million for a focus ultrasound device.

This piece of technology will help those with Essential tremor and other conditions such as Parkinson’s Disease and Multiple Sclerosis.

She was also involved in petitioning the Parliament to back the provision of magnetic resonance-guided focused ultrasound (MRgFUS) technology within the health service in Scotland.

The device is now in place and it has treated its first patients – although this was privately funded.

The ceremony, which took place on Saturday, saw Mrs Ramsay meet HRH Queen Elizabeth in the Scottish Parliament along with other “Local Heroes” from across the country.

The Prince of Wales and the Duchess of Cornwall, known as the Duke and Duchess of Rothesay in Scotland, were also in attendance.

“I have been working with Mary for several years and as a friend, it was lovely to see her and her hard work be recognised.

“She has been instrumental in getting this piece of technology to Scotland.

“It will see patients have access to not only cheaper surgery, but it is much less invasive than alternative surgeries.”

Mary Ramsay said after the ceremony:

“I had a perfect day meeting HRH The Queen in Parliament.

“It was a lovely day and truly one I’ll never forget!

“The work doesn’t stop here though and moving forward, I sincerely hope this ultrasound treatment will be funded by the NHS so that everyone who needs treatment can access it.

“I will continue to campaign for this and I look forward to working with Rhoda and others in the future.”