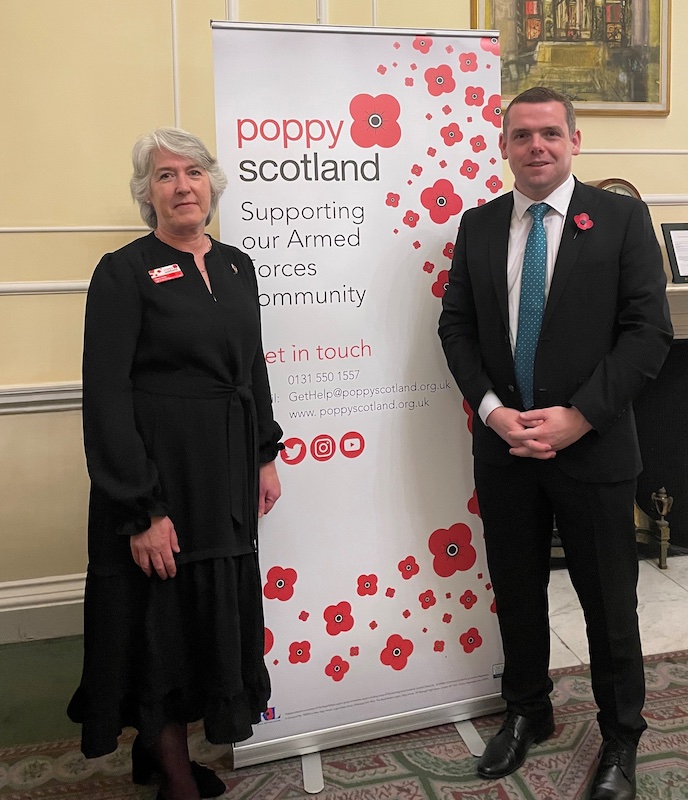 Moray MP Douglas Ross says he was “delighted” to attend Poppy Scotland’s reception at Dover House recently which saw the launch of the annual poppy appeal.

Douglas’s Moray constituency includes RAF Lossiemouth and the Kinloss Barracks and he says the annual reception is an excellent way to launch the appeal ahead of Remembrance Sunday and highlight the outstanding work carried out by the charity all year round.

He was in attendance alongside other MPs, as well as representatives from the Armed Forces and the charity as the building was lit up in red to launch the 2022 appeal.

Douglas says that he knows the people in Moray will yet again get behind the Poppy Appeal as they always do each year and says the build-up to Remembrance Sunday and the day itself is a poignant opportunity to remember all those who have sacrificed themselves for their country.

“I was delighted to attend the annual Poppy Scotland reception at Dover House.

“This is always an important event as it offers a perfect opportunity to not only launch this year’s Poppy Appeal but to thank the charity for the fantastic work they do all year round.

“As usual it was a wonderful evening alongside not only fellow MPs, but more importantly those from Poppy Scotland and representatives from the Armed Forces.

“The appeal and the run up to Remembrance Sunday offers a poignant opportunity to remember the sacrifices made by those in Moray and right across the United Kingdom for the sake of our country and their families who do so much to support our service personnel.

“I know that people across Moray will once again give their strong support to the Poppy Appeal just as they do every year and I encourage everyone to get behind the 2022 appeal.”