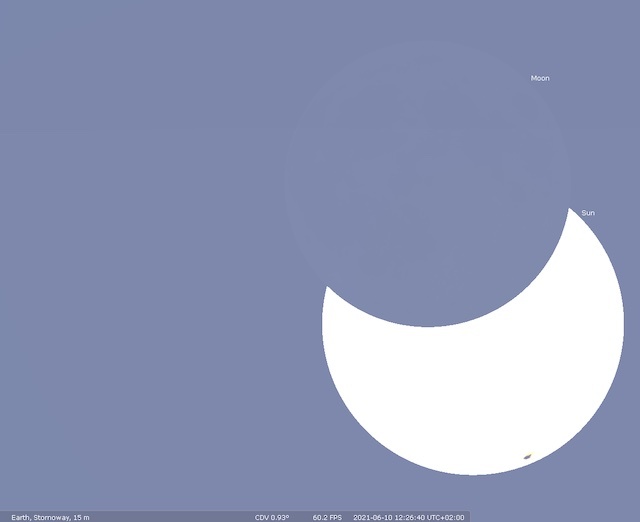 A renowned meteorologist will be closely monitoring activity at Point and Sandwick Trust’s Beinn Ghrideag wind farm near Stornoway today (Thursday, June 10), along with a number of others across the country, to see what effect the solar eclipse will have on wind power.

Dr Eddy ‘Weather’ Graham, an award-winning researcher and lecturer at the Lews Castle College UHI, will be scrutinising the wind data from around the time of the eclipse in late morning, in a bid to find evidence for a phenomenon known as the ‘eclipse cyclone’.

This is when the moon’s shadow causes winds to slow and even change direction, as the sun temporarily stops driving the weather system.

It also causes temperatures to drop and clouds may start to dissipate a little as well.

The effect is most obvious during clear skies – but Eddy is still hopeful of detecting some changes in the winds despite the poor forecast.

He has focused on the wind farms including Beinn Ghrideag because they have anemometer wind readers on their turbines, as part of the technology to monitor wind and power output.

Although the turbines in Lewis are not currently generating power due to the broken subsea cable, the anemometers are still working and continually gathering wind data.

It is that data, collected centrally at Wood Group’s control centre in Glasgow, that Eddy intends to scrutinise.

If the weather conditions are favourable, he will be looking for the wind to slow down around 20 minutes after the maximum shadow of the eclipse and to last for its duration.

Those 20 minutes are the length of time it takes for weather to “speed up and quieten down”, Eddy said.

He said the eclipse effects would be “a bit like going into sunset in the evening – when the cloud starts to dissipate and the wind starts to fall.”

The eclipse, as seen from the Western Isles, will be a partial one, with a maximum of 38 per cent of the sun surface to be covered by the moon.

It will be difficult to perceive a decrease in general brightness of the day but it should be clearly visible via properly filtered camera telelenses, binoculars and telescopes.

Eddy’s colleague, energy engineer Giuseppe Petricca, has created a software simulation – highly magnified – of what the eclipse will look like from Stornoway, weather permitting.

However, it is stressed that everyone is advised not to look directly at the eclipse without proper sun filters or glasses because of the risk of eye and retina damage, which can happen very quickly indeed.

Eddy explained the effect of the eclipse cyclone, if it was noticeable, would only last “an hour or so”, the length of time of the eclipse.

There is evidence of the phenomenon from previous eclipses but Eddy cautioned that it “may not be possible to notice it this time round, if the weather is wet or windy.”

“Ideally, it would be nice and calm with a strong sun, because if you have a strong sun and you turn it off, then it will be more noticeable.”

Any information which can be gathered could prove very useful for the future as such variations in weather are not built into the current modelling for forecasts or for expected power generation at wind farms – or even for trading on the stock market.

“Eclipses aren’t built into the weather production models that we have and wind farms use these all the time to predict what their energy output will be.

“Because our models don’t include it, we therefore might overestimate the amount of renewable energy production.”

This effect on renewable energy production, and ultimately available electricity, would be cumulative as the energy being produced by solar sources would drop at the same time.

“If you’re turning off the solar beam and turning your wind production down, you’ve got a significant reduction in the amount of renewable energy.

“The prediction of energy output is a huge multibillion industry so any small fluctuations can amplify into large effects.”

“I’m interested by the natural world, like most other meteorologists, but it does have practical significance for everyone else.

“Eclipses are rare, ethereal, unique experiences that everyone can appreciate.

“People cannot fail to be amazed by their natural beauty.”

Beinn Ghrideag site manager Tony Robson said this was “good for scientific research and understanding of the universe” – and Point and Sandwick Trust was happy to help, having put Eddy in touch with Wood Group so he could access data from other wind farms as well as Beinn Ghrideag.